MediaTek has added to its offerings of 5G processor with the successor to Dimensity 720, the 800U

For a market that goes GaGa over Qualcomm’s chipsets, MediaTek’s uprising has been commendable. The Snapdragon SoC has built an unshakable reputation, hence the Taiwan manufacturers have mostly come second in a consumer’s choice. This is not to say that MediaTek has been outsmarted in all the dimensions. The wide-range of processors on offer from the Taiwan brand have held their ground firmly in the game. Moreover, they have been quick with their releases and updating the tech, a result of which is the new Dimensity 800u.

A look at Dimensity Family and 800U

About a month ago, MediaTek had launched the Dimensity 720 chipset and it took them almost no time to launch the 800u. MediaTek with this new arrival has also overtaken Qualcomm’s Snapdragon series. No, we too wish that this was in terms of sheer performance, but this is only a case of numbers. Qualcomm offers six 5G processors, whereas the 800u adds to MediaTek’s tally making it their seventh, to support 5G. Now, as per the sources, this processor will sit somewhere in MediaTek’s mid-range listings. MTK have claimed better output numbers asserting that the GPU will churn out 28% and CPU 11% more performance respectively. This is in comparison to their one-month-old Dimensity 720. The former seems quite unnecessary then, but this is MediaTek we are talking about, and in abundance lies their style. 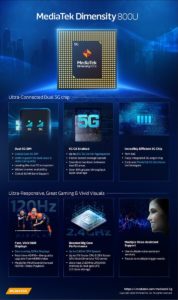 Most customers who have heard of MediaTek whether they own it or not is owing largely to their Helio chipset lineup. The Realme 6 has it, so does OPPO Reno3 Pro, even the Samsung Galaxy A31, clearly, the case of total domination by Qualcomm, is a myth. Yes, preference wise, if the latter falls in your budget, we do entertain our bias then. But truly, it is the elder siblings to the Dimensity 800u that gave the Taiwan brand a big boost. Flagships like iQOO Z1, the Redmi K30 Ultra are fueled by the Dimesnsity 1000 series and have sold just as well, as the Snapdragon 865s do. The Dimensity chipsets are exclusive to China for the time being but will soon be released in the global market.