As the canons mark, in the absence of a week for the arrival of patch 10.13, the head of League of Legends gameplay design Mark Yetter has just released the main lines of it. After a series of updates much discussed by the game community because of how small and uninteresting they were, especially in terms of evolving the metagame, it seems that Riot Games has put its batteries and brings us a version loaded with accurate adjustments.

It seems that with the issue of the poor performance of the Volibear rework solved by various improvements and even a hotfix or mid-version update, now is the ideal time to work on tweaking all the most damaging aspects of today’s League of Legends. Too strong champions, completely overpowered items and the odd rune that conditions the metagame; All of those things get answered with League of Legends patch 10.13.

Updated 10.13 Patch Preview with our current changes. Things aren’t yet final so some may still change. pic.twitter.com/zEQoxzslNf

Let’s start with the runes and items. The Conqueror is being completely decisive in the upper street and even in the jungle or the central street. Achieving damage as abilities and attacks are applied against enemy champions is already powerful, but obtaining healing is decisive in many matches. In this patch, the total accumulations will be increased from 10 to 12 and the adaptive damage that each one contributes will drop from 2-5 according to level to 1.7-4.2 points.

Although an additional problem of this Conqueror was the synergy that he gets from one of the most broken objects in the game such as the Dance of Death. Since its update in patch 10.6 that grants it both magic resistance and armour, this item is practically a must in many upper street bruisers and has even appeared as a more than a profitable option for Ezreal in the South Korean SoloQ. Stamina, healing, and damage on a single item; luckily it will be nerfed in patch 10.13. 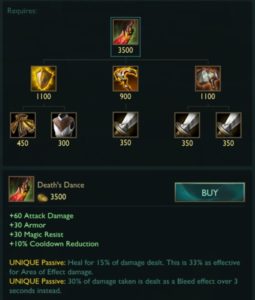 There are also important successes in the nerfs to champions. Each and every one of the chosen ones is being decisive in different ranges of SoloQ and even in the recently started competitive game. Yuumi had established her reign of terror with Ezreal, Syndra is still one of the most versatile champions, we all know how powerful Ornn is, Cassiopeia was exercising as a kind of Syndra in the lower street, while Aphelios and Kalista do not let other shooters appear in the upper street. Perhaps a nerf is missing to Varus, but otherwise, they are very successful weaknesses.

As for the improvements, almost disappeared characters like Yorick, Ryze, Gnar or Vi appear. This is what buffos should do: to open up the spectrum of viable champions in League of Legends. See if Riot is leftover with this remarkable patch 10.13 that are allowed until improvements are made to off-meta AP builds from Kog’Maw and Nunu, which we already detailed here; and even this will be the patch in which the possibility of reporting in the champion selection phase is added. The best LoL patch we have remembered in a long time.

How To get & catch Sawk In Pokémon Sword & Shield