How To get & catch Sawk In Pokémon Sword & Shield

Pokémon games have always stood for exploring the wilderness and encountering the unique wildlife. For long players have walked in the tall grass expecting to run into powerful Pokémons to expand their team. One such addition to your team can be Sawk from Pokémon Sword & Shield. Today we are going to help you find Sawk and capture him for good.

Before we attempt to capture him, we need to know more about who Sawk is and how can he benefit your team. Sawk is a fighting type Pokémon specialising in Karate. He likes to strike with his hands, feet and elbow and use his body as a weapon against his foes. 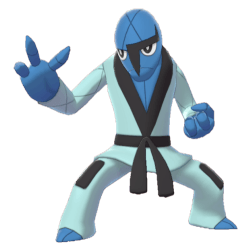 Sawk’s fighting techniques in the game is a clear representation of that in the anime. When encountered, he is fully evolved with no other form. As you might have noticed, we have been refering to Sawk as “him”. This is because Sawks come only in one gender thus they cannot breed.

This makes them very rare to find. So hold onto the one you fortunately meet along the way and evolve him. Sawks can prove to be a really powerful addition to your Pokémon roster.

As mentioned earlier, Sawk is a fighting type Pokémon. This makes them week against psychic, flying and fairy type moves. That being said, they are strong Pokémons best used for extreme form of offense.

As you level him up, your Pokémon will learn new powerful moves. The most powerful move in this Pokémons move list is Close Combat. It’s power level is 120 and it is learned at level 55. A little less extreme move which can be used against weaker Pokémons if you intend to capture them rather than just destroying them is Brick Break. It is learned at level 35 and it removes barriers such as light screen and Reflect.

Additionally, Sawk can learn every punch move in the game such as Fire punch, Ice punch and Thunder punch. He can also learn the poison jab. So experiment with these moves and pick out the best possible combination of moves for your needs.

Where to find Sawk

Once you have prepared your team to face against the karate kid, we can proceed further to capture him. This Pokémon is extremely rare with only 5-10% chances of spawning at best. The most common location to encounter him is Root 8 Streamdrift Way area. Sawk has a 5% of spawning there at all weather conditions. 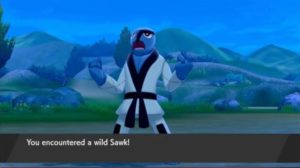 Following is a list of all other places you can expect to run into him : 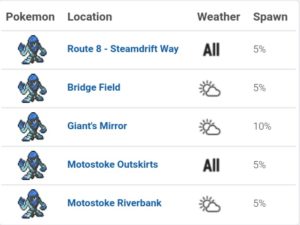 As mentioned earlier, they are an extremely rare species so expect some search time.

Unfortunate news for Shield players, Sawk is only a version exclusive Pokémon for Sword. This makes him unobtainable in the wild. However, fear not as there is a way to get your hands on one if you own a Shield version.

Head to the centre of the town where you will find a wishing well fountain. On the right side of the fountain is a food vendor standing behind his stall. You can talk to him and trade him a Vaillish for a Sawk.

The same method can be used to obtain a Throh in Pokémon Sword. We hope that this article was helpful and you found your desired Pokémon.