Woot is an original daily deals site. It was founded in 2004 and later snatched up by Amazon in 2010. Initially, it provided only one product per day until it sold out. But today, it offers special daily deals and other limited-time offers among seven categories. The site has various useful features. You will be able to purchase products at low prices and there are things that you never even knew that you needed. There are everyday polls, jokes, and monkey chats from their monkey mascots, Mortimer and Morte.

If you are an Amazon Prime member, you would get free standard shipping and free express shipping on Shirt. Woot. There is a feature called Woot-off. It is a long-day gauntlet of unannounced deals. The deals launch every 30 minutes and so. It doesn’t happen often but when it does, you would want to check back so that you don’t miss the very cheap prices and limited quantity offers. 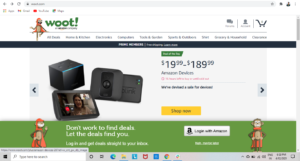 The website is an independent subsidiary of Amazon. It follows various kinds of similar business practices. Woot has been in business since 2004 and provides free shipping for Amazon Prime members. There is a 30-day return policy. The website might not be your first choice if you are searching for a specific product but it is the best place for shopping and find deals and unusual gifts.

But despite everything, Woot has received negative feedback from many users. Most of the users said that the website is no more like it was before. A user said that he started using Woot in 2006 before it was owned by Amazon. It had the best deals at that time. But now, the customer service is very poor. The user added that you have to wait for many days for their response and find out that they actually misunderstood what you have written in the email. Another user said that he purchased Sony headphones from the site but it got damaged a few days later.

As I can see, apart from all these, there are other negative reviews that you can find on the internet about Woot. So, if so many customers have been negative about the website, then there must be something wrong. I would recommend to you all that if you love online shopping, better prefer some other website instead of Woot.