Is the Latest Agent of Valorant ‘Skye’ Broken?

Since the launch of Riot’s first-person shooter Valorant, every aspect of the game has been discussed, debated and criticised on the internet. From the ability of an agent to the potential of a weapon, Valorant developers have been able to connect and understand the needs and demands of the community.

In it’s latest patch 1.11, Valorant has introduced it’s new sentinel agent ‘Skye’ which has abilities which can define the outcome of a match. It is an ideal agent for the game as it has the abilities to flash, stun, heal(not self, team) and reveal the enemy location with its ultimate. Not even 48 hours have passed since the latest patch has been dropped and the internet has already shown us some groundbreaking plays with SKYE. 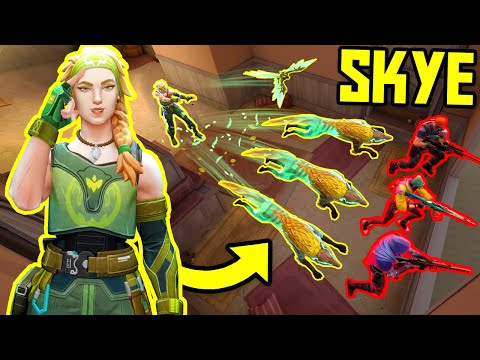 Alongside this update, other sentinels saw some nerfs as now ‘Cypher’ tripwires and ‘Killjoy’  turret will also get disabled after the agent dies itself and they will only function within a given range. This is considered a major nerf in the professional scene as in the pro level the game is highly favourable for those with more information on their opponents. If both or any of the abilities stated above is planted on a particular site, a player can hold another site in case of defence. This update has made the game more balanced as it used to lean towards the defending side.

We never know what to expect as the game is still in its initial stage and has to go through many more changes to become a more balanced and optimised game. But I can guarantee that  Skye will be receiving its first nerf or update within less than a month. Especially with the heal and the flashes.

Stay tuned with us for more updates on Valorant and various other games. Till then, Happy Gaming!!