Optics Planet is the best destination for gear and one of the popular retailers in the United States. Optics Planet was founded in the year 2000 and has been providing a diverse product selection for those who play. work and serve with passion with the best brands in optics, gun parts, ammunition, hunting gear, outdoor and survival gear, apparel, footwear and various other categories. The site also provides exclusive products that you will not find anywhere else which includes products from TRYBE Defense, TRYBE Optics, OPMOD and other exclusive products from various other brands.

For the last 20 years, the site’s unmatched selection, competitive pricing, informative how-to guides and customer reviews, free value shipping offer, daily rewards in the form of Optics Planet bucks has made the site the gear destination for many people every year. It is a privately held online retailer of shooting, hunting, military, law enforcement, eyewear and laboratory equipment. The headquarters of Optics Planet is located at Northbrook, Illinois and has been operating many specialized online destinations and its own official website.

It was launched for building a direct-to-consumer e-commerce site for optics and the site grew to achieve a total revenue of around $163 million and a staff of over 300 employees. Optics Planet has been recognized as one of the Top 500 e-commerce sites by Internet Retailer Magazine of United States. 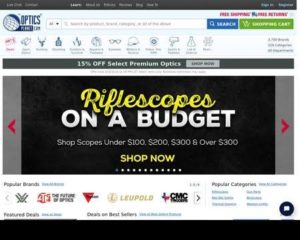 But as usual, a question always arises on whether a website is reliable or not. The same question has been asked by many people about Optics Planet. If we look at the consumer reviews, there have been mixed reactions. Now, a user said that he decided to purchase a Nikon Prostaff EFR Target 3-9×40. There was no indication that it was not yet available but Optics Planet was the only site that was offering it for sale. He received an email stating that it is backordered and will be available in 5 to 10 days. But on live chat, he got to know that it would take 3 to 4 weeks. Later he checked on Google and saw that the product has been listed by various vendors. He again opened Optics Planet and he was told that the shipment will arrive as soon as the product is delivered to Optics Planet. Now, this looks sketchy as the product was listed available on various sites whereas he was told by Optics Planet that it will take at least a week.

On the positive side, another user said that he made a large purchase and he was called right away to verify that it was him who made the purchase. Users have also preferred other websites in terms of price and shipping charges in comparison to Optics Planet. One user has mentioned that the site has some inventory tracking issues.

Looking at everything mentioned above, I cannot say for sure that the site cannot be trusted at all. Sometimes issues occur in terms of your order for various reasons and if you feel that something might be wrong, then you can definitely choose some other site to purchase your product. But at last, its your choice whether you want to go for Optics Planet or not.

Among us not loading on iPad & iPhone : How to fix it ?

Among us not loading on iPad & iPhone : How to fix it ?