The update is rolling out in batches

Huawei unveiled its P40 Series: the P40, the P40 Pro and the P40 Pro+ back in March 2020. Due to the pandemic, the launch event was held online. And just like the P30 series, Huawei continued to pull out all the stops for its cameras. While all three phones have their differences, they are mostly the same. They are all powered by Huawei’s own flagship Kirin 990 5G processor. They all have beautiful OLED displays with a pill-shaped cut-out at the top left.

All these phones run Huawei’s EMUI 10 built on top of Android 10. But due to US sanctions, these phones have no access to Google Play Services. But Huwaei has continued to work on its software. The P40 series comes loaded with Celia, Huawei’s answer to Siri and Alexa.

And looks like they are continuing to improve on their software. They are releasing the new July 2020 Android Security Patch fro their P40, P40 Pro and P40 Pro+ devices. EMUI 10.1.0.150 not only brings in the latest July update but also has some fixes. It improves smart screen recognition in some scenarios. This OTA update will be pushed out in batches, so not all users will get it at the same time. You can check the changelog down below.

The official update description transalated from Chinese is given belows.

Dear users, this update optimizes the experience of using smart screen recognition in some scenarios, and incorporates Android security patches. It is recommended that you update.
【system】
Optimize the use experience of smart screen recognition in some scenarios
【Safety】
Incorporate Android July 2020 security patches to enhance mobile phone system security. 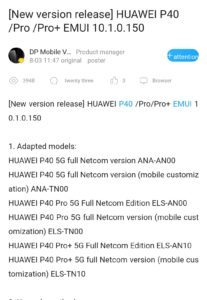