The Japanese multinational company Sony has recently launched its latest next-generation gaming console PlayStation 5 (PS5) as successor of PlayStation 4(PS4). The company has launched four major consoles since its first release back in 1994.Sony’s gaming consoles are among the most popular gaming consoles worldwide and with the launch of PS5, it is surely going to acquire huge market as compared to its competitors Xbox Series X and Series S.

The console is powered by AMD Zen 2 3.5 GHz Octa-core chipset coupled with an AMD RDNA 2 GPU. The device can output up to 8K resolution and 4K gaming resolution. Ray tracing, 3D audio-effects and backward compatibility are some of the major features of PS5. The new PS5 comes in two variants: – Normal console and Digital Edition (no disc drive) priced at $499 and $399 respectively.

It seems like PS5 users are having a great time enjoying and experiencing the new features but few of them are having bad experience. Some users have reported a bug while starting the CALL OF DUTY BLACK OPS COLD WAR game on their PS5. The bug is that as soon as the user loads the game, messages saying “Something Went wrong with this game or app” and “ERROR CE-108255-1” pops up. After 4-5 seconds, the app crashes and a report screen appear.  Have a look down below: – 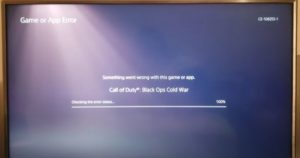 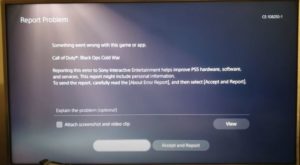 As tried by users’ multiple times, the error appears only when you try to connect the game online but works perfectly fine when you are offline. It seems to be software related problem with the PS5 account rather than the PS5 console. If you are also facing similar issue then you can try few steps as it has worked fine for many users. 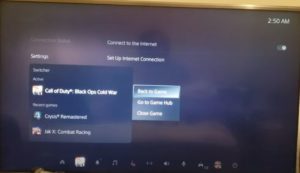 If your bug is resolved by the steps above, feel free to share this article to those who might find it helpful.