The update brings in some fixes too

Honor was started as a part of Huawei’s efforts to compete in the mid-range, both at home and globally. So, it might be natural for some to assume that Honor phones are not as good as the phones its parent company makes. But Honor has kept improving its game and with its P30 Pro series, it came close to matching Huawei’s flagships.

The Honor 30 Pro was released in April 2020. It has a 6.57-inches OLED display with a resolution of 1080 x 2040. It runs on Huawei’s in-house Kirin 990 5G processor which is based on the 7nm process. As for storage, you can get up to 128 GB of storage with 8GB of RAM. On the back, it has a quad-camera setup with a 40MP main shooter and a 16MP ultrawide. It has also the Periscope zoom lens, which gives it really good zoom capabilities. The Plus variant has is almost identical with just a few upgrades. You can get up to 12GB of RAM and the main shooter on the back is 50MP.

While these specs are certainly great, if you live outside of China, you should be aware that it while it does run on Android 10, it has no Google Play services. So, if you rely on any of Google’s services this could be a dealbreaker.

But Huawei has continued to work on its EMUI 10 software and keeps delivering improvements to its devices. And they have just released the July Android Security Patch for Honor 30 Pro and Honor 30 Pro+. Version 3.1.0.176 brings in improvements to the camera and increases the overall stability of the system. This is an OTA update and all users are recommended to download and install it.

The official description translated from Chinese is given below. 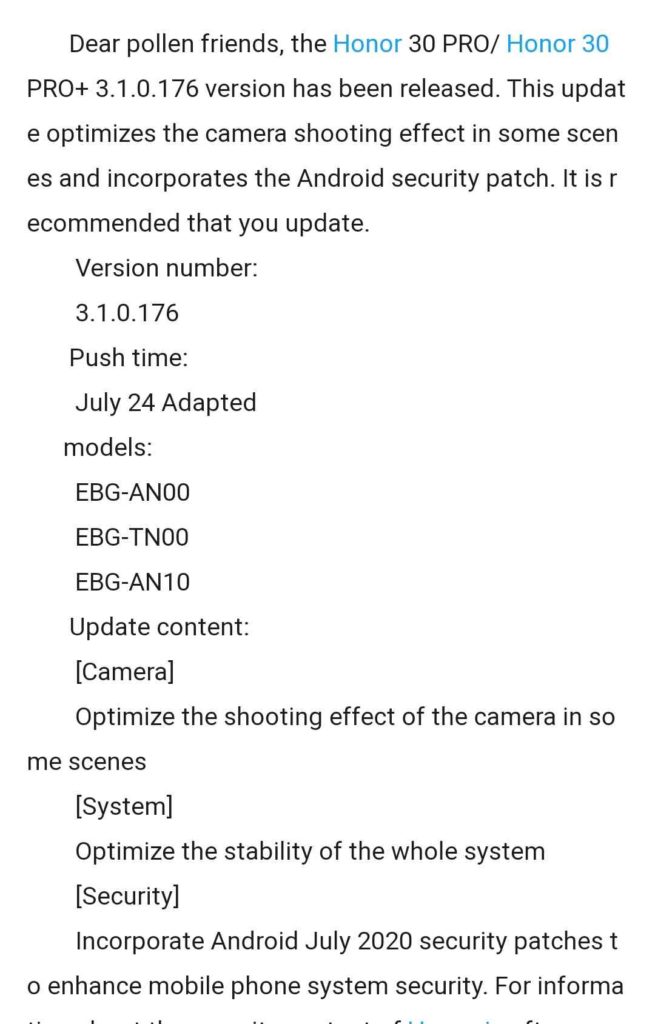