The recent Game Awards 2022 has been an eventful day for the future of games. Along with your favorite games receiving awards, there were many new games announced. One notable game is the new Mike Mignola’s Hellboy Web of Wyrd. Yes, there is a new game for all the Hellboy fans to look out for. This roguelite action game will have you experience the various supernatural mysteries in the world of Hellboy. Keep reading to find out more about the release date for Hellboy Web of Wyrd.

Mike Mignola’s Hellboy universe is going to get more fun with the game following an original storyline. Mike Mignola and Dark Horse Comics have come up with a brand new story that will be original to the Hellboy universe. The art style involved in the game is very comic-style-like. The ashy color palettes and the black outlines have created a comic-like universe alive. Our protagonist, Hellboy, is a detective who investigates supernatural happenings. He works for the Bureau for Paranormal Research and Defense (B.P.R.D.). The game is being developed by Upstream Arcade and will be published by Good Shepherd Entertainment. Now that Hellboy fans know what to expect from the upcoming title, they are curious about the game’s release date. 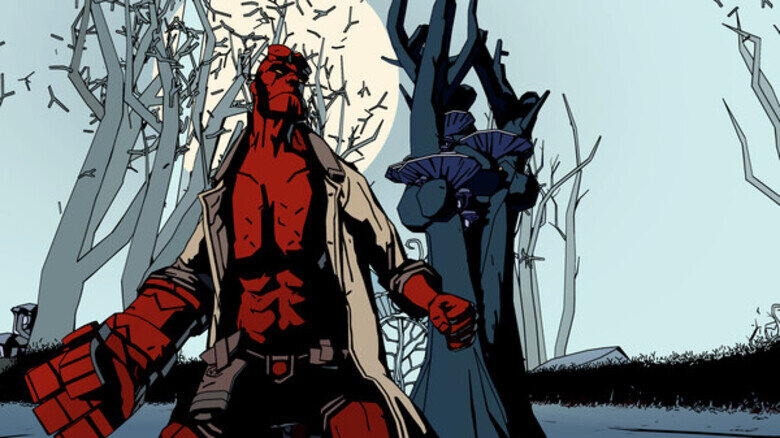 Hellboy Web of Wyrd currently doesn’t have a definitive release date. The studio released a reveal trailer of the game that gave us a glimpse of the action-packed fight scene. We can see Hellboy appear from the shadows to face a Werewolf-like monster. You will then witness an exchange of punches in this scene which looks straight out of the comic book. Well, the game’s official Steam page mentions Hellboy being able to engage in close-range melee as well as ranged attacks. This can be a good thing considering that there is a wide variety of enemies to tackle. Also, from the reveal trailer, we got to know that the game will be available on all major platforms including PS4, PS5, Xbox One, Xbox Series X/S, Nintendo Switch & PC.

Well, coming to the story, it revolves around the dark and mysterious dimension called the Wyrd. It can be accessed through The Butterfly House, built by an occultist. The occultist goes by the name Pasquale Deneveaux. You, the protagonist, will be sent on a mission to recover your colleague (B.R.P.D), who has been missing since his last visit to the Butterfly House. As the story progresses, you will be able to uncover the secrets of this gateway. Finally, the game also has a greater evil in the depths of Wyrd waiting to escape, but you will have to prevent such an event from happening. Along the way, you will come across stronger monsters, and mystical artifacts as well.

With that being said, the game sure looks promising with Mike Mignola’s presence and we all are looking forward to more updates on Hellboy: Web of Wyrd. So, make sure to visit Digistatement for more information on the same.