Google Play Store issue while changing the country : How to fix it ?

Google Play Store is popular as the official app store for all your favorite apps and games. It can also be called Google’s officially pre-installed app store for Android-certified devices. It offers access to content like apps, books, magazines, music, movies, and television programs, Google introduced a new automated virus system called Google Bouncer in February 2012 for scanning new as well as existing apps for malware. In 2017, the Bouncer feature and other safety measures in the Android platform have been rebranded under the umbrella name Google Play Protect, which is a system that scans apps for threats on a daily basis.

Google described a new security effort known as peer grouping in July 2017. Here, apps performing the same functionalities as calculator apps, are grouped together and attributes are compared. If one app stands out, like requesting more device permissions than others in the same group, Google’s systems automatically flag the app, and security engineers take a closer inspection. Peer grouping is done on the basis of app descriptions, metadata, and statistics like download count. 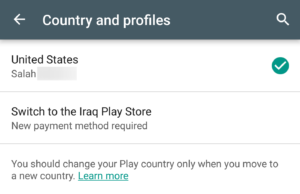 However, Android users have recently reported an issue related to Google Play Store. Users said that they are not able to change the country on the basis of where they are staying. Now if you ask me why this is important, let me tell you that there are certain apps and games that are not supported or available in some countries. They might be banned or restricted. So, in that case, it becomes important to change the country for accessing the apps.

Users have complained that they are not able to change their country and a few others have complained that they are not even able to find the option. Some also said that even though they were somehow able to change the country, they had to change it again on the next day since it automatically changed to the default one. If you are experiencing the same type of issue, there are a few things you can try to fix the issue by yourself –

Google Play Store not responding : How to fix it ?