Google Play Store is Google’s platform for providing different digital content to its consumers. In comparison to what people might think, Google Play Store is not just an app store. You will find every type of content here. Google Play Store is the home to music, movies, books, and games along with the regular Android applications. Google offers a huge collection of music from all across the world. This requires a subscription or one-time payment because you can digitally purchase content. There are movies and books along with apps and games.

A few of the apps and games require payments and the others do not. Everything is clearly mentioned in the app listings. All Android smartphones do not come with Google Play Store pre-installed. It is pre-installed on smartphones that ship with Google Mobile Services also called GMS. We are talking about Android as one platform and it is open-sourced. It is free to use and manufacturers are not forced to pre-install Google Mobile Services if they don’t want to at all. We are used to GMS that includes pre-installed apps by Google. 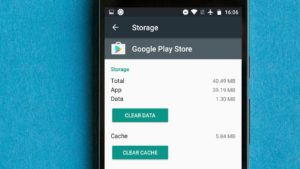 Most of the users said that the problem has been going on for multiple days. They have also complained to Google support but it has been of no use. So, if you are facing a similar kind of issue, you can try a few things to fix it by yourself –