Global Mi A3, Redmi Note 8 Pro users still waiting for the Android 10 Update : Here is all you need to know

Chinese OEM Xiaomi has always provided its users with top-class devices. Xiaomi devices offer huge value for money and at the same time come with beautiful design and great performance. Xiaomi has a great number of amazing lineups of smartphones. The Mi A series and the Redmi Note series are two of the most loved series in the market today. The Mi A3 and the Note 8 Pro are the latest iterations to both of these amazing lineups respectively. The Note 8 Pro was launched in September 2019 while the Mi A3 was launched back in July 2019.

It’s been really long since users have been waiting for the Android 10 update and all they get is an unfulfilled promise. Ever since Xiaomi had revealed the dates for the update on Twitter users were going crazy and were happy about the news. Users are now really furious and not at all happy with Xiaomi with what they got after eagerly waiting for so long. This is how users expressed their dissatisfaction and anger on Twitter: 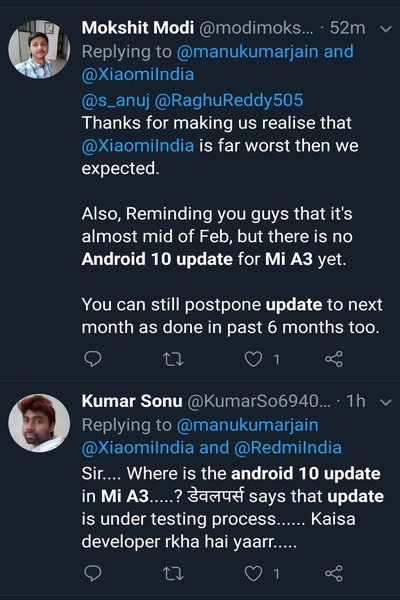 While Xiaomi has been securing the tag of No.1 Smartphone Brand, dissatisfied users are now stating @XiaomiIndia as “Worst than expected”. Xiaomi was teased for how they have been announcing the updates for devices but are unable to roll out the same in the said time for the past 6 months. Other users also started mocking the developers of Xiaomi, saying what kind of developers do they have. A user also showed his complete anger on Twitter saying if they will ever even get the Android 10 update or not. Have a look:

Mi A3 and Note 8 Pro users are completely dissatisfied with Xiaomi. Users are also signing a petition for the Android 10 update for the Mi A3.

Note 8 Pro also got the MIUI 11 Global EEA Stable ROM V11.0.3.0.PGGEUXM at the starting of January and then on 13 Jan China stable beta update was released for the smartphone. If you are in China then you can also download the update here (China Stable Beta). 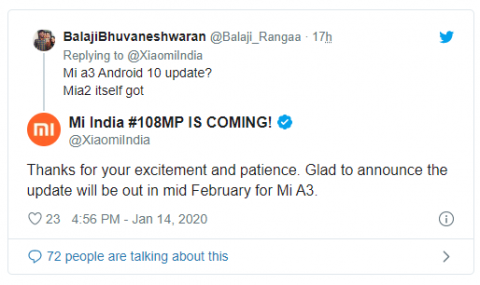 Stay tuned for further developments about the Mi A3 and Note 8 Pro Android 10 Update. Also, share this article with other users who have been waiting for the Android 10 update.