About Tom Clancy’s Ghost Recon Breakpoint: Ghost Recon is an online tactical shooter video game developed by Ubisoft Paris and published by Ubisoft. The game was released worldwide on 4 October 2019, for Microsoft Windows, PlayStation 4 and Xbox One, and on 18th December 2019, for Stadia

We are here to answer if you are a Ghost Recon Breakpoint player and wondering why you can’t play the game for now. Well, there can be a lot of reasons, maybe game servers are down. This can happen because of a fault, or the company has intentionally done that for server maintenance. And sometimes, it is done to add new content with rolling out the update.

Here, in this post, we will keep you updated with the server status of the Ghost Recon Breakpoint game. So, you just need to check out the post or our new official Twitter handle (@DigiStatement) for the updated content.
The server status updates mentioned here are based on the official statement by the company. We will update the post as soon as possible. Also, we will be adding the newly updated content at the end of this post.

On searching about this issue, we get to know that issues are occurring in Ubisoft servers. And currently, Ghost Recon is not the only game to face the issues in connectivity and matchmaking, other Ubisoft titles are facing the same problem.

The official Twitter handle of Ubisoft Support posted addressing the issue and mentioned the problem in Uplay services. According to the official statement, the issues are occurring in accessing the Cloud Save data on Uplay PC. 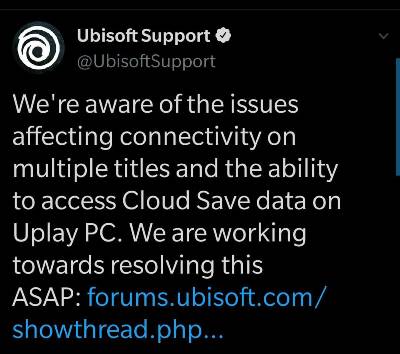 Ubisoft posted another tweet and mentioned, “We are still working to resolve the issue. Thank you again for your patience.”

Stay tuned, we will keep updating this space with the latest server status.

Minecraft Down (not working) for many users

Minecraft Down (not working) for many users