However, you can also play the Week 7 of Friday Night Funkin in an unblocked version from the link below :

I’m sure you all are waiting for the release of Friday Night Funkin Week 7. There have been rumors about KawaiSprite finishing the development of the new songs. This hints at the release of the most-awaited Week to be out soon. Read our blog to know more about this. 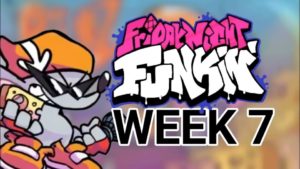 Friday Night Funkin is said to be the best produced and artistic rhythm game developed by Canadian programmer Cameron Taylor also known as Ninja Muffin 99 in OpenFL. It is largely inspired by Dance Revolution, Rock band, PaRappa the rapper, and many of the New ground and Flash cultures.

The story of Friday night Funkin revolves around the character “The Boyfriend” who wants to date “The Girlfriend” but is unable to do so because of her father “Daddy Dearest” who is a former rock star and disapproves of the relationship. In order to get his girlfriend, he has to defeat his father and an array of unusual characters in various rap battles.

In the player has to take the role of Boyfriend and pass multiple levels, termed as “Weeks.” Each week has 3 songs. In each of the weeks, the player will face a unique opponent in a rap battle.

Week 7 has kept everyone glued to their seats eagerly waiting for the developers to release it. Well, as the Week 7 has not been released yet, so its unblocked versions for school & chromebook are yet not available. We will update its links once the Week 7 goes live officially.

The new week will feature some new characters, especially a new antagonist. Many fans had speculated Ritz to be the antagonist for Week 7. However, this turned out to be a mere false rumor. Ritz is an anthropomorphic rat and is the main character of the game Ritz. This character was in fact developed by Ninjamuffin99 and musically composed by Kawaisprite. Ritz was rumored to make a debut in FNF when NinjaMUffin posted an art style GIF of Ritz on his Twitter page. But he allegedly deleted it 30 seconds later. But we are sure that Ritz will surely be an antagonist in any upcoming weeks.

Looking at the fan’s excitement for Week 7 and the appreciation for the past updates, the new Week will definitely turn out to be a hit!

How to type in Among Us new update ?

How to type in Among Us new update ?