Are you tired of trying to defeat an array of strangers in an arena of a rap battle just to impress your Girlfriend’s Daddy Dearest? How about you up the game by bringing the mighty speedster Sonic, the hedgehog in the game, and finally overcome that final hurdle? With your protagonist, “the boyfriend”, acquiring that iconic appearance of the fastest creature alive, your confidence will surely be blown off the roof, if not anything else. Here is how you can download and apply the mod. 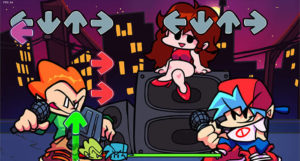 We are all familiar with a blue anthropomorphic hedgehog named Sonic going against a rotund male human villain named Doctor Eggman (or Doctor Ivo Robotnik) that was introduced by SEGA in its video games. Keeping up with its rising popularity, the Sonic universe has expanded a lot more and introduced new characters every now and then. But the protagonist of the story, Sonic, did succeed in maintaining its position as the favorite character.

You can now grab the chance to upgrade the appearance of the hero of Friday Night Funkin with this newly released mod. Even if, for now only the most popular character has been added in this mod, but the creator has promised the inclusion of the other characters of the Sonic Universe.