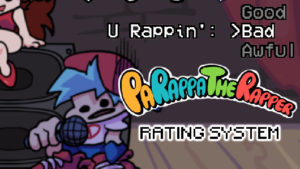 The basic gameplay and the concept of Friday Night Funkin have always been considered to be influenced by Rock Band, Dance Dance Revolution, and PaRappa the rapper who was popular during the early-mid-2000s. With the application of the mod PaRappa Rating System.

The health bar of the actual game will be completely replaced by the rating system that can be found in the gameplay of PaRappa the rapper. Your performance in the game will determine whether that rating goes up or down. If your rating goes below Awful, you immediately lose the stage. By default, you must complete the stage with a Good rating to win. The song instrumentals change depending on what rating you’re on, which is very much similar to  PaRappa games.

You can download this mod by gamebanana  from this link: