Friday Night Funkin’ is an open-source game. It means that anyone who has experience in modding and animation can easily modify this game. That is why there is no doubt that FNF has witnessed a lot of mods since its release. There are a lot of mods about which we have written articles, you can check them out by heading here.

By adding these mods, FNF becomes more interesting as it adds different kinds of taste to the game. Various mod makers from different parts of the world try to add their own taste or the taste of the demand to the game. Furthermore, it is also obvious that every fan wants to make a mod of Friday Night funkin’ by himself. The fans also enjoy them to the fullest. In this article, we will be talking about how to make the mods of FNF.

FileDaddy is one of those tools by which a player can mod the game. It includes very easy steps to modify the game according to your own taste. 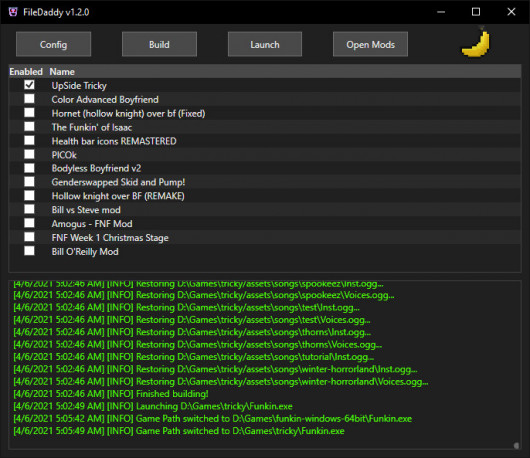 Lately, FileDaddy released its new version 1.2.3 but it seems that they have removed it because the API of the website(gamebanana.com) was updated to release version 1.2.3 but the API got reverted so this version of FNF Mod Maker could not work longer. Version 1.2.3 was released with a feature of fixing one-click install features but it has to be replaced by version 1.2.2.

Version 1.2.2 came with an improvement in the mod-loader to convert between different pre/post week 7 file names. This version also came up with a tweak in the UI. Now, UI will be having purple highlights after ‘Daddy Dearest’ (Rival from the first week).

Check out this Modding Tool for Friday Night Funkin by gamebanana.com: Download

You can also check other FAQs and steps to make some Mods at gamebanana.com