There are plenty of mods in Friday Night Funkin that makes it one of the highly regarded rhythm game. But, what if you could play with all the best parts from the other mods and have it on a single mod? Well, that’s what the new MegaMix mod 4.1 does for you!

Find out more in our blog.

This is a game that delivers you electrifying music, impressive charts, unique characters, and whatnot. The game centers around our protagonist, “Boyfriend” who in an effort to get his girlfriend has to fight a rap battle to impress her father. Wait, did I tell you? Her father, Daddy Dearest is an ex-rockstar and he really doesn’t like our hero. That leaves no choice to the Boyfriend but to hit the streets and defeat whoever stands in front of him.

In FNF, you have to mirror a pattern of notes sung by the opponents. You can do this by pressing the arrow keys or WASD. You have to hit every note correctly. The bar at the bottom will tell you how well you are doing. The left side represents the opponent whereas the right side represents the player. The player wins if he/she fills up the entire bar. This game is developed by a Canadian programmer known as Ninja_Muffin99 and is regarded as one of the best rhythm games out there. 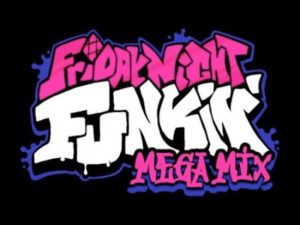 This mod pack includes many popular songs from various popular mods in the Free play menu such as the Duet Mod Songs, B-Side Songs, and many more! All the ingredients are filled while making sure it remains less intrusive as possible to the story mode. Moreover, you don’t have to worry about having songs/characters overwritten. The new update also adds a new stage, characters, and songs in the game.

You can completely enjoy playing the original Friday Night Funkin’ songs as well as your most favorite modded ones. However, it misses some popular mods such as Annie, Monika, Doki Doki lit club, and silva mod. Still, the creator has done a pretty great job while creating such as great mix.

You can download this mod directly from the official GameBanana site or click on the link given below.

After your download is complete you can extract the files and replace them with the original ones to enjoy this mod.

Credits of this Mod:

Credits of the game: