The FNF V.S Zardy Foolhardy mod FEATURES Zardy the Scarecrow, who is annoyed by the trespassing of Boyfriend and Girlfriend. Well, he doesn’t want to shrug them off but rather wants to have a rap battle with him. Read our blog to find more about this mod. 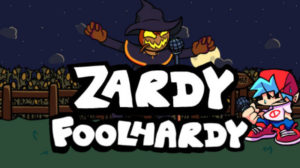 Friday Night Funkin’ is a free-to-play and open-source indie rhythm game developed by Canadian programmer Cameron Taylor, who is referred to as ninjamuffin99. The game is inspired by Rock band, Dance Dance Revolution, PaRappa the Rapper, an aesthetic reminiscent corresponding to Flash games fashionable within the early-mid 2000s on platforms like Newgrounds and Cool Math Games.

The game revolves around the story of the main protagonist who is named “Boyfriend”. He has an array of characters in rapping battles for him to be ready to date his love interest, “Girlfriend”. Friday Night Funkin’ is a rhythm game in which the player should pass multiple “weeks”. Every typical week contains 3 songs. Moreover, the player faces a unique opponent every new week.

The characters, Boyfriend and Girlfriend get lost when they are hanging out in a cornfield maze. Out of nowhere Zardy pops in. He is not the traditional scarecrow you might find in the fields, he has got some really powerful moves. Zardy wants a rap battle with Boyfriend and wants to teach them a lesson.

This mod is based on the game “Zardy’s Maze”, created by SwankyBox. Yet again, Rozebud has delivered some really funky music in it.  Starny art has done the artwork in this mod whereas KadeDeveloper has done the programming and SwankBoxl has done the animations.

The game has amazing charting and funky cool music. You’ll lose a reasonable amount of bar when you miss some notes that make it reasonably fair. Apparently, this mod is fast and termed as one of the hardest mods of the game.

So get your moves right because Zardy is quite a tough nut to crack!