Skid and Pump are back to the party. The mod has been updated to week 5. Read this blog to find more about the Friday Night Funkin (FNF) Skid & Pump mod. 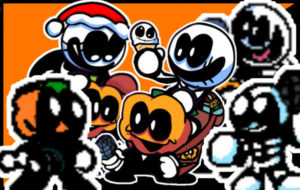 Friday Night Funkin is a flash rhythm game developed by Canadian programmer Cameron Taylor also known as Ninja Muffin 99 in OpenFL. It is inspired by Dance Revolution, Rock band, PaRappa the rapper, and many of the New ground and Flash cultures.

This Skin mod features Skid & Pump. With heavy music, this mod seems to have quite a funky style in it. On the lateral Skin and Pump add a charm to this game. This mod strangely misses the float but it is somehow manageable. There is a Skid and Pump icon but if you like the game version in which every character has an Icon, you can press 9 to avail it. In this mod, you’ll find Skid and Pump taking a toll on Daddy Dearest and Mom. Furthermore, the developer has updated this mod to Week 5. So there is a lot more you can find in this updated mod.

So, get on your funky groove and get this party started!