Forza Horizon 5 will not support mods, confirms studios amid confusion

The incorrect listing of Forza Horizon 5’s store page which includes the line- “This game supports mods” has created a lot of confusion for the Forza players. In this article, we are going to clear the mod support confusion as we have some solid sources to back our information. Here’s everything you need to know.

The store page of Forza Horizon 5 featured a line that stated- “This game supports mods” which created a huge confusion among the Forza lovers as to why are they including mod support in their game. 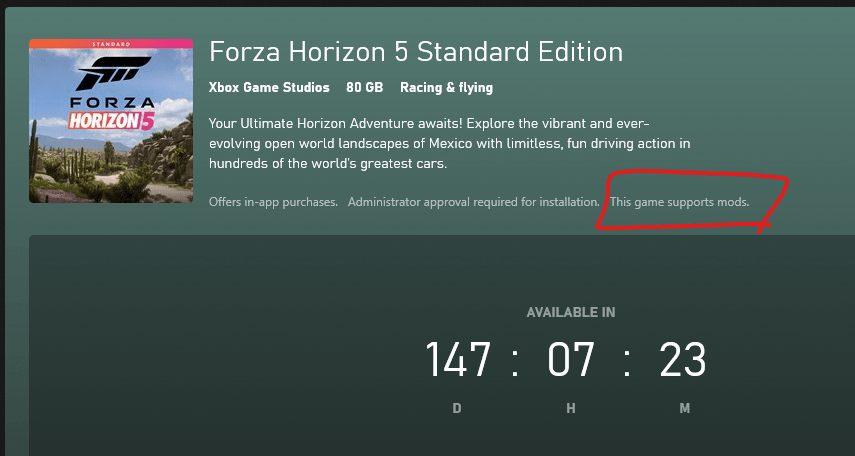 Well, after hours of confusion starting to build up, Turn 10 Studios finally released that the statement was an error from their side and it wasn’t true. Their statement goes something like this-

“No, Forza Horizon 5 does not allow users to modify game files in any way. We are aware there may be some confusion on the store page saying that you can. We are correcting that line of text.”

"No, Forza Horizon 5 does not allow users to modify game files in any way. We are aware there may be some confusion on the store page saying that you can. We are correcting that line of text." pic.twitter.com/SqGtywMSrM

The release date of Forza Horizon 5 has been scheduled for November 9 according to the recently released trailer. Yes, it is official that the game is set to release in Nov 2021.

If you are interested to watch the trailer for Forza Horizon 5, here’s the video-

Players can access this game on Day 1 with the Xbox Game Pass.

The game will be released on the following platforms including- Xbox Series X|S, Xbox One, Windows 10 PC, Xbox Cloud Gaming.