Fortnite is an online video game developed by Epic Games and released in 2017. It is available in three distinct game mode versions that otherwise share the same general gameplay and game engine. Fortnite is available across all platforms – Windows, Playstation 4, Xbox One, Nintendo, and also on Android and iOS mobile platforms.

Recently, several Fortnite players have been posting about an issue on various social media platforms. According to the users, Codaxe Pickaxe are missing and they cannot use them. Well, a lot of players were reporting the same issue. And if you are facing the same issue, fret not, you are not the only one.

Fornite recently responded and responded to this issue officially social media accounts. In the tweet, Fortnite Status’s official handle posted that the Codaxe Pickaxe have been disabled in the game due to an issue.

Well, no other detail was shared in the tweet, but it mentions that the thread will be updated once it’s back again. 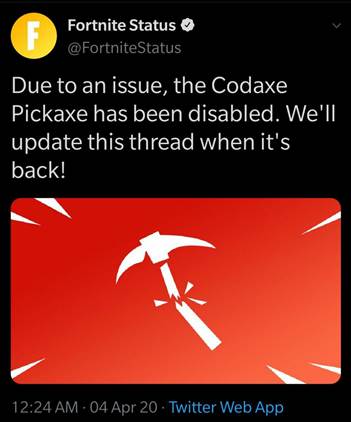 PUBG Mobile down, not working | PUBG Mobile servers suspended by Tencent – Here’s why