Fix Disney+ Chromebook Error 83 in 2021 by this method

Disney+ is a subscription video on-demand over-the-top streaming service. It is owned and operated by the Media and Entertainment Distribution division of The Walt Disney Company. The service usually distributes films and television series produced by The Walt Disney Studios and Walt Disney Television. It also has dedicated content hubs for Disney, Pixar, Marvel, Star Wars, National Geographic and the Star brand for selected international markets outside the United States.

Disney+ was launched on 12th November 2019 in the United States, Canada and Netherlands and later expanded to Australia, New Zealand and Puerto Rico. It was available in selected European countries in March 2020 and in the month of April in India through Star India’s Hotstar streaming service and it was later rebranded as Disney+ Hotstar. Other European countries received the service in September 2020 and it was expanded to Latin America in November 2020. The platform received positive feedback for its content library but it has also been criticized for the technical issues it has been facing occasionally.

The streaming platform relies on technology developed by Disney Streaming Services that was initially established as BAMTech in 2015 when it was spun off from MLB Advanced Media (MLBAM). Production of films and television shows for exclusive release on the platform started in late 2017. 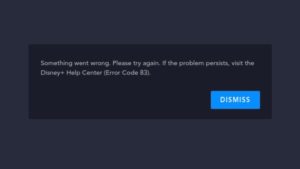 Some said that the Error 83 appears only when the Chromebook is connected to Wi-Fi but when users connect it with the mobile data, the streaming service doesn’t show any error. A user said that he installed Disney+ on his Chromebook and his log in was also successful but the service started showing issues while streaming and suddenly the Error 83 appeared on screen. If you are facing the same issues on your Disney+ while using it on a Chromebook, you can follow these steps to fix the issue by yourself –