Many people are skeptical about it but it needs to be put out there that most Chromebooks come completely equipped with an inbuilt internal microphone. The mic on this device is usually located in the webcam or under the keyboard, which is used for video calls, voice recording, or online conferencing. 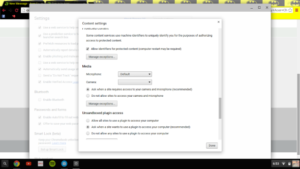 But sometimes what happens is that the mic settings are set too low to pick up any kind of sounds and it may require some kind of adjustments. And well, there could be a fact that a broken/defective completely, and this would maybe require a professional. But nevertheless, let’s look into this problem and see whether we can find out why it’s not working and try to troubleshoot it.

Causes of your microphone not working:

Now below are the most common reasons why your mic isn’t working on the Chromebook:

Let’s look into how to troubleshoot step to step guide from the beginning to the end.