Everything you need to know to win the trophy

The original final fantasy VII had a very creative mission where your character fully dressed up to do a rescue mission on Don Corneo’s mansion saving Tifa. The remake gracefuly has given it back to us.

Now your actions before Chapter 9 dictates what dresses Cloud, Aerith and Tifa wear for the occasion. Each character wears a unique dress but if you get all nine of the available dresses, you win the trophy named Dressed to the Nines. You probably have to finish the game first and get back onto this mission to complete this side quest. This will help you gain levels and EXP tremendously.

To get Tifa’s dresses you need to complete all the side quests in chapter 3. A discovery event afterwards places Cloud and Tifa to their apartments where they are conversing. Tifa asks Cloud about the dress she should wear in case of a future hangouts session between the two. Depending on Cloud’s choice, Tifa will wear her dress: 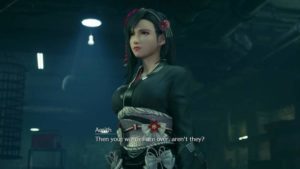 For Aerith’s dress depeding on the number of side quests you complete from chapter 8 will result in her choice of dress.

Cloud’s dresses are just a little bit more tricker. Completing specific side quests in Chapter 9 will lead to a specific result.