The FIFA 20 Team of the week (TOTW) is released every Wednesday and it features players that have performed exceptionally well the previous week. These cards are released as ‘In Form’ for that week only and have boosted stats and altered card art. Due to the current ongoing global situation, all the domestic and international leagues were shut down for nearly three months and the FIFA TOTW was also kept on hold. But, recently the domestic leagues have returned and EA Sports is set to reveal FIFA TOTW 30 this Wednesday at 3 PM (UK time). Another exciting week of matches has been completed and fans are eager to find out which players will make it to the TOTW squad this Wednesday.

There is still a lot of football to be played in the domestic and international leagues this 2019/20 season. UEFA has released the qualifier draws for the Champions League.

Liverpool has already secured the Premier League title with still a number of games remaining. Barcelona and Real Madrid are battling hard in the race to secure the Spanish La Liga title.

Juventus has extended their lead in the bout for the Italian championship. Manchester City has also reminded fans that they have been a force to be reckoned with, under Pep Guardiola in the past few years. The former premier league champions have secured remarkable victories against Newcastle and Brighton. Let us take a look at all the players who are expected to secure a spot in the Team of the Week 30 from the recent fixtures including all the midweek games.

Raheem Sterling secured a hat-trick this weekend and his teammate, David Silva provided crucial assists. Benzema, Paulinho, Banega, Cazorla, and plenty others performed well to earn their spot in the TOTW squad. We will know about the confirmed players this Wednesday. 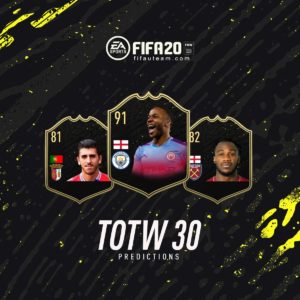