EVGA had already encountered enough trouble with scalping and bots.

EVGA happens to be enjoying this new spell, driven by NVIDIA GeForce RTX 3000 series Ampere GPUs. The brand has displayed strong contention with five initial SKUs prepared to go on sale in the entry phase. Well, honestly it’s fair to say most third-party manufacturers have received good traction but have all been evenly jeopardized too. In this age of hefty E-commerce scalping, fake MRPs have all become very common. Some tend to make note of it, while some are on the receiving end of the fraud. EVGA weren’t alone in this crisis. The likes of ZOTAC and MSI had all complained of facing the issue. The good part is, these manufacturers have with due diligence kept their customers informed about the status of their production. 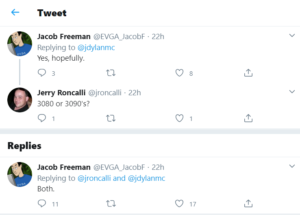 Jacob Freeman has often been the go to man to relay important information from EVGA. Jacob informed us of 6 full POSCAP capacitors on FTW3 that in mass QC testing had failed to perform. In a tweet he revealed that both RTX 3090 and RTX 3080 products will be restocked and open next week. For that very reason, the launch date for RTX 3080 had been delayed. The XC3 variant had however performed properly. EVGA had recently shared pictures of all their performance review units shipped to various reviewers. A few users on Reddit had given some sense of assurance. They had also signaled at inventory being available in retail store but nothing sufficient on that has been provided.

Is Bakugo Dead? My Hero Academia Chapter 286 Spoilers and Raw Scan are out: ‘One Among Us’