Escape from Tarkov features various types of ammo of the same caliber which inflicts different effects. The type of ammo you are using can be the factor responsible for the upper hand in duels and vice versa. So, lets us see what EFT has implemented to their ammo system in-game.

Escape from Tarkov is a first-person shooter but unlike any other generic shooter game, it has got some unique ammo mechanics that are quite interesting to play with. Featuring different effects of ammo of similar caliber and different penetration values, this game has an innovation within itself.

Every class of ammo has a constant damage number if done to an enemy without armor but when the enemy has one, the damage is severely lowered due to difficulty in penetration. So, to understand this, an EFT Ammo chart has been made by u/Armandik to help us understand the amount of damage a round of the particular caliber will do to a particular class of armor. Have a look at it down below. 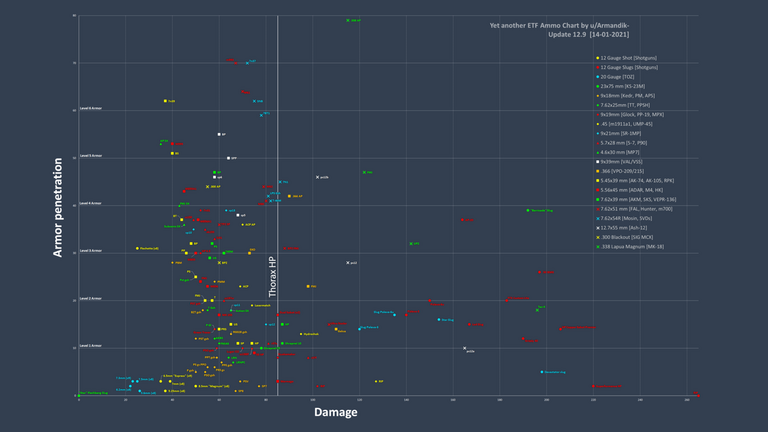 Every ammo of each caliber available in the game and the armor penetration value can be found in this graph.

If you don’t seem to grasp what we are discussing, then head over to this video that will make you understand the concept of ammo and the pen value in different armor classes.

Escape from Tarkov recently received a hotfix  0.12.9.10489 that fixed many bugs found in the game including game client bugs and errors that were causing the game servers to crash. For a detailed insight on this hotfix, head over to this Reddit Post.

League of Legends (LoL): Two artists that Riot Games should be inspired by for skins on Yuumi