eFootball Pro Evolution Soccer, aka PES, is one of the most popular football simulation games. PES 2020 is the newest entry in the PES franchise and brings improved graphics, improved simulation, and improved game physics.

The new PES 2020 has attracted a lot of soccer lovers all over the world. The mobile version of the game was launched recently, but fans got carried away by instability issues on Android and iOS platforms.

Well, now, PS4 players are facing an issue in PES 2020 recently. Several users have been complaining about the issue in eFootball PES 2020, which is creating log-in problems. eFootball Pro Evolution Soccer or PES 2020 is available to play on all major gaming platforms like PS4, Xbox, PC, and even on mobile platforms like Android and iOS. But only PS4 players have been facing this issue.

For your information, some PS4 users are facing a disconnect problem, whereas, some users are not able to log-in to the game because of this new Server Issue in PES 2020.

Konami, today, officially recognized this issue occurring in the game. And according to the official statement, the developers are investigation the server issue. 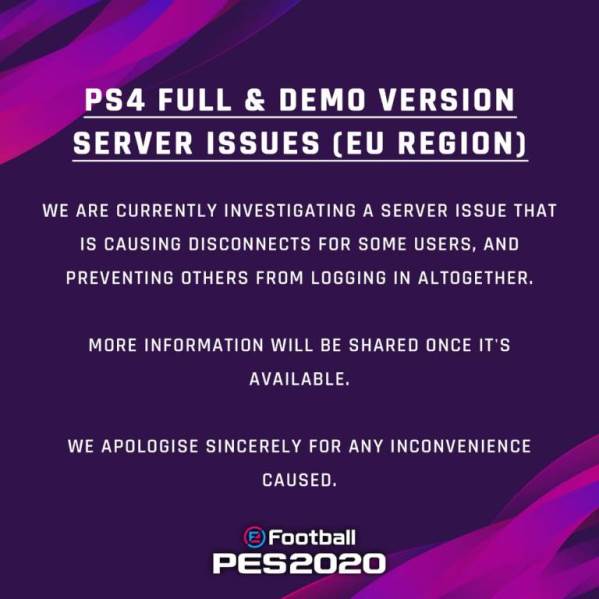 Well, we certainly hope that the issue will be resolved quickly. Rest assured, we are keeping a close watch on the current outage & situation. Whenever any update arrives regarding this issue, we will update the column. Stay Tuned.

Disney Plus servers down & not working : Connectivity issues on website & app along with login errors

Disney Plus servers down & not working : Connectivity issues on website & app along with login errors