Dragon Ball Z: Kakarot is a semi open-world action role-playing game developed by CyberConnect2 and published by Bandai Namco Entertainment, based on the Dragon Ball franchise, released for Microsoft Windows, PlayStation 4, and Xbox One.

Dragon Ball Z: Kakarot has been receiving DLC at regular intervals and developers have successfully engaged players and fans all over the world with the new content and storytelling. Well, it’s been long since the last DLC rolled out for all platforms and now fans are asking what’s planned for the next update. For now, there are no official details on the same, but we have got some leaked information, which we will be discussing in this post.

The leaked information about the upcoming details comes from the V Jump Magazine scans. And credit goes to @DBHypeX (twitter) who has been reporting fans about the coming DLC in Dragon Ball Z: Kakarot. And recently, two V Jump Magazine scans were posted by @DBHypeX on Twitter, which suggest that the next DLC is going to feature a new card game mode, boss battle against Beerus, training with Whis and the appearance of Oracle Fish. 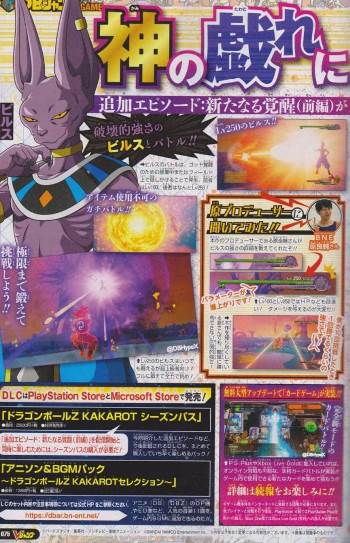 The second leaked image suggests that the players will get another chance to participate in Goku vs. Vegeta battles. Well, the Goku vs. Vegeta fight is going to add some variety, but it would be really interesting if we could be part of SSG Goku vs. SSG Vegeta. It’s just our expectation, but it’s clear that in the upcoming DLC fans will be able to SSG Goku and SSG Vegeta against Beerus, not just 1v1 battles. SSG Goku and SSG Vegeta boss battle seems legit, as it’s going to be a tough one, even for characters at the max 250 level.

So, chances of SSG Goku and SSG Vegeta battle against Beerus are high. 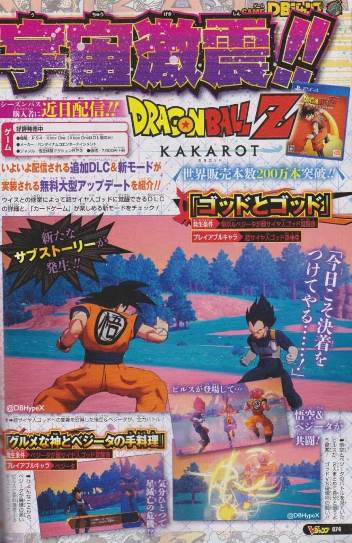 This is all we know about the upcoming Dragon Ball Z: Kakarot DLC, for now. But, stay tuned, we will be sharing more details on the same very soon.