THE DRAFTS OF TOYOTARO ARRIVE IN WHICH THEY SHOW US A LITTLE OF THE HISTORY THAT WE WILL READ IN THE DRAGON BALL SUPER 65 MANGA.

by Jahan Patel
in Manga, News

” Dragon Ball Super ” is, apparently, very close to the closing of the Moro arc, which has carried the weight of the Akira Toriyama and Toyotaro franchise in recent months. With Goku making use of the Ultra Instinct Dominated and the main villain a priori without any option, everything points to a moment of transition coming soon … unless the protagonist of the franchise does something totally unexpected at this point. So in this post, we will talk about Dragon Ball Super Chapter 65 spoilers and release date.

It has been a custom that in the absence of a week for the arrival of the chapter, the official website of Dragon Ball shows the drafts of Toyotaro. This time it is the turn of the Drago Ball Super 65 manga.

It was thought that the cosmic villain would be destroyed, then Goku had a phase … go underground. According to what was revealed in the first eight manuscript pages of Dragon Ball Super Chapter 65, Krillin arrived at the scene of the fight with a bag of magic beans in hand. Goku grabs the bean bag and teleports to Moro.

I know we are all waiting in anticipation for the chapter. And it will be out soon as the official date is released. Dragon Ball Super 65 will release on 20th October 2020. A detailed spoiler post will be made as we get closer to the release date. We will also review the chapter soon enough for you to read. But I sense something ominous happening here.

As the space patrol ships plough through space they begin to notice the disappearance of something important. Jaco is confused about why Merus has disappeared, and asks Son Goku about his real identity, although the only thing What the Saiyan does is clench his fist tightly.

Moro starts to fly clearly in anger and frustration, and that’s because Merus has knocked him out with some kind of technique that he doesn’t understand. Goku tells Jaco to take a step back; At the same time, Moro descends and asks Goku where Merus has gone. Goku tells him that he is gone, and that right now only he – Goku – is the one who can defeat him. Moro answers that Goku continues saying the same things from before, although the Saiyan says that this time it is different, because he has inherited the will of Merus. After this, it begins to charge its energy.

It’s my dad!’ Gohan yells. ‘Dad has finally …’ At the same time Beerus feels that the strategy seems to have worked, something Whis agrees with: Now show us the completed Ultra Instinct!’

Goku comes face to face against Moro having finally completed the Ultra Instinct. Moro is surprised: ‘What … what is that shape …’; ‘Silver hair !?’ shouts Jaco, ‘it’s the first time I’ve seen that colour,’ says the patrolman.

Goku starts walking towards Moro, who is completely terrified, even shaking. As Goku approaches Moro tells him not to take another step, and releases a blast of ki. Before he can shoot, however, Goku grabs his arm, moving much faster than Moro is capable of perceiving. ‘Stop hurting the Earth’, Goku says to Moro without even looking at him.

Piccolo realizes that this time it is Moro who is charging his power to go all out. Moro has just charged up his energy and Goku waits calmly as he prepares to receive Moro’s attack. Before Moro can get to attack, however, he is completely immobilized by Goku. Goku throws Moro into the air and delivers a tremendous punch to the torso.

The force of the blow causes an impact wave that shakes the ground and is felt throughout the Earth. Moro continues to get beaten up as Beerus can be seen commenting that he is perfect. “Oh, how unexpected of you to admit something like that …!” ‘I have to admit, that fighting style is worthy of a god’, Beerus replies looking at Goku. Goku senses that Whis and Beerus are present.

With Goku still, Moro lunges at him from behind, but before he can get to attack Goku kicks him in the face and sends him against one of his own energy blasts. Moro falls to the ground and Goku tells him that it’s over, that Earth is no longer one of his toys.

After this, Moro realizes that Goku is very fond of the planet, and says: ‘Then I will swallow this planet first …’ . Moro raises an arm, but before he can do anything Goku kicks him one more time and sends him against a pile of rocks. When Moro tries to stand up, a tremendous rock falls on him. He begins to ask someone to save him, exclaims that he does not want to die.

Goku observes before turning to Jaco: ‘Hey Jaco, this guy has the death penalty right?’, Jaco says yes: ‘You can finish him right now’. ‘I see … so from now on let me fight him like one more earthling,’ says Goku as he rips off what remains of his shirt. ‘How? What do you mean? ‘Says Jaco. Beerus and Whis are shocked, Whis comments: ‘Looks like the galactic patrol is over …’ Beerus has a bad feeling … “. 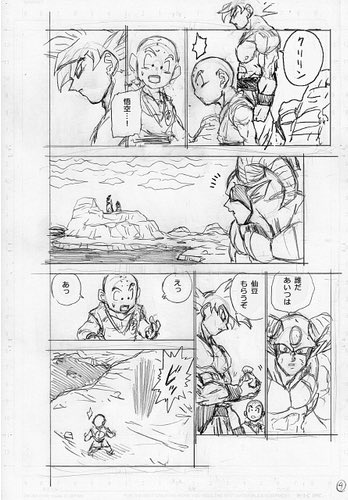 I will tell you the complete summary for Dragon Ball Super 65. From 8 pages most of the story in the next chapter is clear and we will breakdown and extrapolate everything that has happened. Beware there are huge Dragon Ball Super Chapter 65 spoilers in the next few paragraphs. If you wanna wait for the official release date to read then stop here.

Krillin finally reaches the combat zone and regains his calm when he sees that Son Goku is still with the UI and standing before Moro and that, a priori, he does not seem to need a magic bean. At the same time, Goku turns the rock Moro was on to dust and tells Moro to stand. The moment Moro stands up, he realizes that Goku has disappeared and is now with Krillin. Moro begins to wonder who this guy is. Goku suddenly takes Krillin’s last magic bean and disappears without Krillin being able to react.

Goku tells Moro that he will help him if he agrees to go to prison with the Galactic Patrol, and he also promises never to escape again. Moro is surprised and accepts the offer, promising never to repeat acts like the ones he has committed. Goku then gives Moro a bean. Goku tells him that if he eats the bean, he will recover instantly. The promise is that Moro must heal himself and give himself to Jaco so that he can take him back to prison. Jaco is completely shocked by Goku’s actions.

Moro eats the bean and Krillin begins to wonder if Goku is crazy. Moro regains his strength and is surprised by the fact that the bean’s regeneration capacity is greater than that of Number 73. Jaco then tells Goku that there was no need to heal Moro. Goku, after all this, tells Moro to honour his promise. It is then that Moro responds: “Sure. Thank you, Son Goku. But I have one thing to do first, and that is … kill you!” With that, Moro pounced on Goku, who continues to exude calm and tranquillity.