Dr. Stone Chapter 151 is live on Viz. finally, our dear Science team has reached America and surprisingly there are already 2 people who are unpetrified. The one to get de-petrify on himself is an adult and a real scientist who goes by the name of Dr. Xeno. He has already revived a person, Stanley Snider a military man, to work for him so we can say that he already knows the formula for making de-petrification liquid.

Our Science team reached America in the hope of finding the cornfield, which is under Dr. Xeno’s control, for now, to make a huge amount of alcohol to revive all of the humanity.

Gen is currently being interrogated by Xeno, who arrived at their base in order to capture the Corn Field. Gen has told them that the science genius with them goes by the name Dr. Taiju to led them astray. 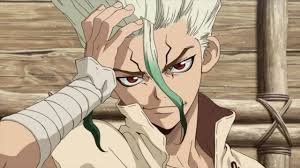 In the next chapter we can expect to have a meeting between Xeno and Kohaku and Chrome. It’s still too early for Senku and Xeno to meet and have a science showdown. Gen would continue to lead false information on their team to Xeno and we can also see just how genius he really is.

It is also a possibility that Xeno would be able to see through Gen’s lies and when Stanley attacks him Kohaku would come to his rescue.

It can be expected that they will form a team to fight their enemy which currently resides on the Moon.