The combination of Drow Ranger and Vengeful Spirit was the best combination for the safe lane in Dota 2 in patch 7.27d. This pair has a 63.30% win rate in ranked matches. Analytical portal GOSU.AI shared the statistics.

Clinkz and Orge Mage came in second with 59.53% wins. Specter and Warlock are in third place in terms of the percentage of wins – their statistics are 59.28%.

Earlier, GOSU.AI analysts named the most successful pair of heroes for offlane in patch 7.27d. She was a bunch of Bloodseeker and Crystal Maiden with 62.41% wins.

Patch 7.27d for Dota 2 was released on the night of August 26-27. In it, the developers weakened Venomancer and Drum of Endurance, and also changed the characteristics of some items and heroes.

Drow Ranger went through a rework earlier this year and has been on & off within metas. But suddenly in this patch, with the nerf especially to Spectre and the rise of strong teamfight lineups, she has seen a comeback. Drow Ranger is the way to go if you want to gain some quick mmr. The statistics speak for themselves, even 1st phase or 2nd phase picks of Drow Ranger does not seem to affect her. She has a lot of counters in the game but if you centre a strong lineup with a save and tank at the front around her, it is easy win.

Her pairing with Vengeful Spirit is especially broken. VS gives her the range increase passive and she seem to hit from the effing fountain at level 3. How does it feel to get zoned out of the lane as a ranged offlaner even while she can harrass you with virtually anywhere. We expect a new patch to arrive to Dota 2 after the end of the battle pass, so you might see a big nerf in the coming week. Use this period to crush your opponents as we deem Drow Ranger the most op carry in patch 7.27d. 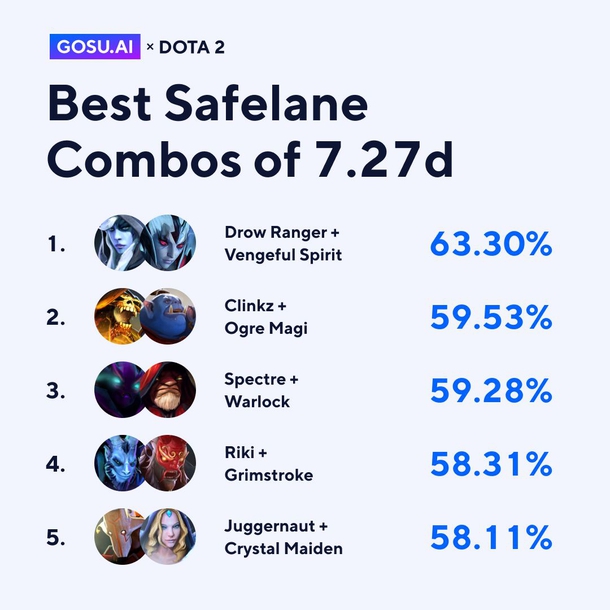