Cyberpunk 2077 is finally going to be released soon and the community is going haywire. It has been one hell of a ride for Cyberpunk from being first teased almost 7 years ago and being released at the end of 2020. However, with such a big game, some small issues are usually accompanied.

@marcin360 posted an update about the sizes of the updates that will be rolling out on consoles and steam. 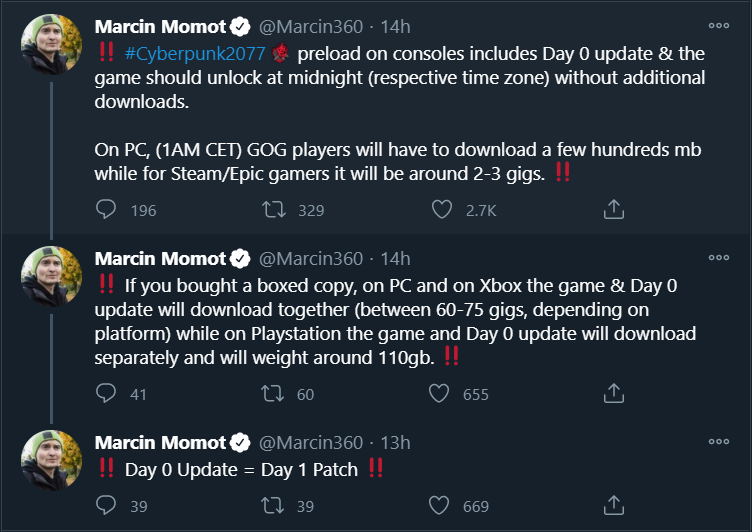 For those who have the pre-loaded version of the game-

Players are facing an error on the update patch where it shows that not enough space is available on the drive. If you’ve downloaded the pre-loaded version of the game from GOG, it is most likely that you’ve been facing the issue while downloading the latest update patch. Some have reported that their update has been stuck at 56% while others were having issues at 92%.

According to a Reddit post, this is happening because the update actually needs 65+GB of free storage to be downloaded and unpack. Although the actual update is only 9.7 GB, a total of 65GB of space should be free in the drive where your game is downloaded.

As of now, this issue is only faced by players who have downloaded the game through GOG and trying to download the update. In Steam, the new update patch has not been provided but it is highly unlikely that the same issue will be occurring there.

The only possible fix available right now is that you need to uninstall the game and then redirect its install directory to a drive that has more than 65GB of space free while installing.

For others who have not downloaded the preload version of the game, the update will be paired with the game itself. So, new players don’t need to worry about that.

Cyberpunk 2077 is an open-world future based RPG game set in Night City. It is developed by CD Projekt Red. The game features unique characters with new customization abilities and perks accompanied by high-tech weapons and a futuristic environment.

Cyberpunk 2077- How to get best free cars and bikes

Cyberpunk 2077- How to get best free cars and bikes