Crayta is Google Stadia’s exclusive sandbox game developed by Unit 2 Games. Released in July 2020, the game offers content similar to Minecraft and Roblox but with additional features and improved visuals. However, the game is marked as “First on Stadia” meaning it will be made available on other platforms including PC and consoles. But the question is when? Here’s everything you need to know.

Crayta was first announced back in April 2020, as an alternative to Minecraft and Roblox for players using the cloud gaming service, Google Stadia. The game resembles visuals and certain mechanics from the famous battle royale game-Fortnite as shown in the announcement trailer.

So far, Crayta is available to purchase in two different versions-

Users who own Stadia Pro will have direct access to the Premium Editon of Crayta.

It is still early to say anything about Crayta’s arrival on PC/Steam. The game currently is a Google Stadia exclusive and it might remain one for a long time. Although if Crayta manages to provide an immersive experience to its Stadia users with quality and engaging gameplay par with Minecraft or Roblox, the game might be made available to popular platforms including PC, consoles, and Switch. But that remains a distant reality as of now.

Crayta has been gaining recognition around the world. With better visuals and mechanics from its direct competitors like Minecraft and Roblox, this might be the future of sandbox games. However, the game still is as buggy as Roblox if not more, but with future update patches, the game can surely improve and provide some new and advanced experience to its player base. Reddit discussions are already taking place about which is better, Roblox or Crayta? 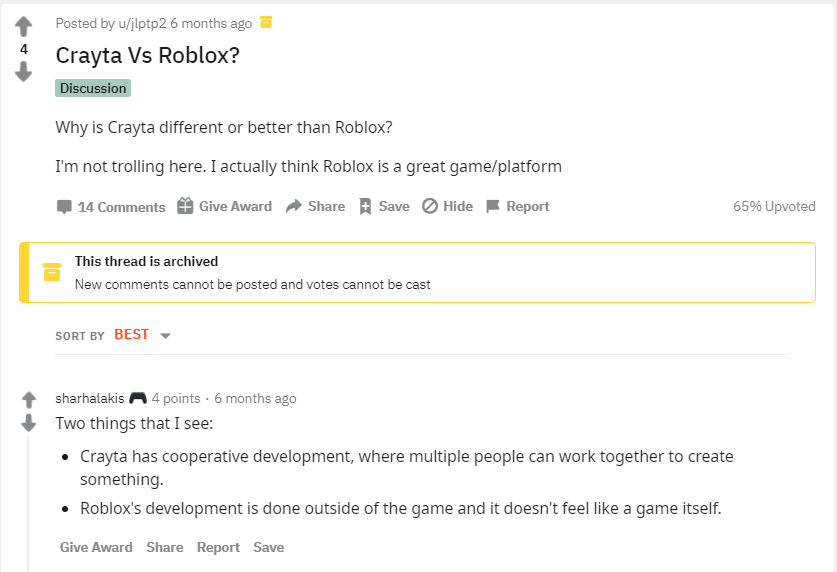 Being recently released, the game still can improve a lot and be one of the best among its rivals.