One of the much-needed updates of Clash Royal is about to get released. The new update introduces new Magic items into the game, similar to what we have seen in Supercell’s other strategy online game, Clash of Clans. Here is everything you need to know about the Clash Royale New Magic Items update. After much speculation, Supercell has put to rest any questions about the latest Magic Items that will be included in the new update. The new magic items will be available in Chests, Trophy Road, Season Pass, and the Shop when the update goes live on April 5th. As a result, the announcement has received an overwhelmingly positive response. Clash Royale has seen a decrease in players in recent months, so adding new features like magic items could help prolong the game’s life cycle and attract new players. 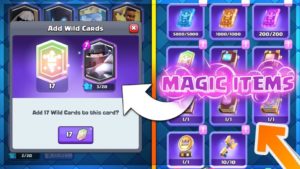 What are Magic items?

Magic items are already a big part of Clash of Clans, Supercell’s hugely successful mobile strategy game. These objects are typically held in the Town Hall or the Builder Hall of a player. These magic items can be used in a variety of ways. They mainly benefit the players’ troops, buildings, and other units.

Another major benefit of possessing a magic item is that it cannot be stolen by an enemy player. This is why it is so common with both veteran and new Clash of Clans players. Furthermore, if a player has an unused magic item, they can sell it for gems, which is the game’s currency. In Clash of Clans, there are 24 different types of magic items, each with its own subcategory. Each magical item has its own set of benefits and characteristics.

Where to find Magic Items?

Chests, the Pass Royale, Special Challenges and Global Tournaments, the Trophy Road, and the Shop are all places where you can find magical things. You have to note that the only Magic Items that can be found in chests are Wild Cards. In addition to the update, everybody will receive a free Book of Books. The Book of Books will be a Pass Royale exclusive after launch and will not be available anywhere else.