by Jigar Panchal
in Gaming, Manga

Chainsaw Dance Demo is one of the unique and interesting rhythm games you’ll find across the internet. You can download this game for free if you have a Windows’s PC or laptop. Here is everything you need to know about this game. 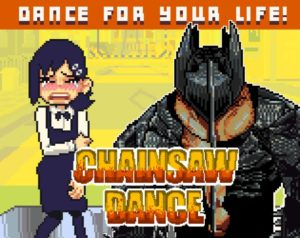 Chainsaw Dance is a free music video game that lets you play on the iconic arcade scene in the popular comedy-horror manga, Chainsaw Man. Developed by Benedique, this independent game pixelated in 2D proposes a rhythm game mechanic in the style of Dance Dance Revolution. There’s not much else in the game besides one round and one song. It is still actively developing and there is currently no kinematics or even failure state

Chainsaw Man is a series of action-horror mangas written and illustrated by Tatsuki Fujimoto in 2018. It revolves around the story of a young man known as Denji, who eventually becomes a demon hunter and inadvertently turns into a monstrous man-devil hybrid with arms of chainsaws.

The manga has gradually gained popularity, selling more than 6 million copies and winning the 66th Shogakukan Manga Award in the shōnen category in 2021. Compared to its source material, the story of Chainsaw Dance is quite lighthearted. In this game, you will reenact Kobeni Higashiyama’s DDR scene, in which the evil main character forced her to dance during the date.

You have to take control of Obeni’s steps and try to hit all the incoming arrows on the screen accurately with the corresponding keys. The demo contains only one song to the max you can get is a high score and nothing special for your win. You won’t fail or die in this game so you can try to beat your high score as many times as you want.  You can hit multipliers as long as you keep up a good streak of hits. There are four keys used in the game.