Call of Duty: Black Ops Cold War Season 1 will be coming on 16th December. With the release date approaching, several leaks are flooding the internet. One such leak that has been confirmed is that Prop Hunt will be added in the Season 1 of the Black Ops Cold War.

@ModernWarzone, a Twitter page that provides several leaks for Call of Duty has posted an update stating that Prop Hunt will be coming in Season 1 of Black Ops Cold War. According to the tweet, the update is 100% confirmed. 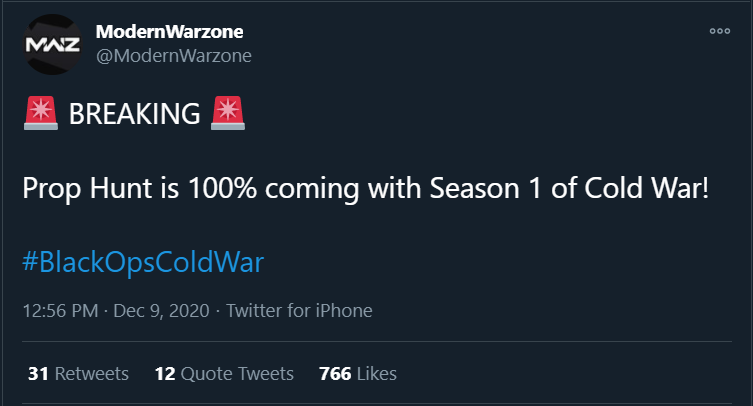 So for anyone who is wondering what Prop Hunt is- It is a game mode where one team hides(prop) and the other team(hunters) have to hunt them. It is basically a modified version of Hide-and-seek. A really fun game mode and that too in COD Cold War will surely excite the player base.

Season 1 of COD Black Ops Cold War will be bringing home some new free content to the game, a new map, and new multiplayer modes. Also a new zombie experience. Players are eagerly waiting for the launch and with the incoming leaks, the excitement level has reached its maximum.

With new customizations and quality content arriving, Season 1’s release will be making a huge impact on the COD community.

In addition to that, the integration of a unified progression system will also be coming with the COD Cold War Season 1 update.

Earlier, the same leaker @ModernWarzone tweeted a post about the addition of water vehicles to Warzone in the Season 1 update. But unfortunately, the leak was not confirmed so he took it down to avoid spreading misinformation.

Meanwhile, Activision has released the new COD Black Ops Cold War and Warzone Season One Cinematic Trailer on their official COD Youtube Channel assuring us that impressive content is heading our way.

Dota 2: Resolut1on will play for Just Error in Epic League instead of Sumail