Boku No Hero Academia Chapter 277 Spoilers: ‘Who is it?’, Be Mine Brother, Deku vs Shigaraki

My Hero Academia is really picking up the pace. Now we made a post on the potential spoilers of chapter 277 this week but the spoilers are already available! I was excited to watch the first raw scans and panels and chapter 277 really lived up to my excitement. The chapter is named ‘Who is it?’ and it showed us the clashes of the two that has been a long time coming, Deku vs Shigaraki. The story is moving forward and currently it is not looking good for our heroes.

Our hero Deku has one of his hand on Shigaraki’s shoulder. The text in the first panel says Deku vs Shigaraki, the creators are not holding anything back. The first panel also has a flash dialogue that says ‘The worst-case scenario’ suggesting the worst that could happen. Shigaraki might steal Deku’s power and become complete in every sense.

While Aizawa has cut off the individual quirks of Shigaraki and Deku wants to capitalize this situation to defeat him. Deku quickly analyses the situation and comes up with an action plan to bury Shigaraki. He understands that if Shigaraki can use his decay then they will have more casualties. Midoriya looks affectionately at Aizawa and both remember each other in fond memories

Next panel is Bakugo intervening with an AP skill shot shouting “Let’s go!!”. The AP shot just tickles Shigaraki and he says “Are you shooting off Fireworks?”. Midoriya uses black whip to hold Shigaraki but he just turns it onto him and throws him away. Shigaraki tells Bokugo that he has no interest in him anymore. Endeavour suddenly cuts into the fight and punches Shigaraki while everyone else exclaims being happy seeing Endeavour.

All the heroes contemplate on the powers of Shigaraki and Endeavour compares him to All Might’s strength. Aizawa mutters to himself that if he closes his eyes everything will certainly end. Endeavour shouts to every hero “Support Eraser, Protect Bakugo and Deku.”

The buried secrets are coming up.

The real cracker of the story starts now, Shigaraki hears a voice in his head saying “Get One for All” and Shigaraki mutters “One for All”, the voice then says “Be mine, my brother”. Shigaraki breaks free from the hallucination saying its his body and his will. Gran Torino says to Shigaraki “Don’t break Shimura’s will anymore!” to which he just says “Who are you?”

Bakugo is above Shigaraki repositioning himself in the chaos and unleashes a big explosion and smokescreen. Before Shigaraki could react, Endeavour punches him in the gut with his ‘vanishing punch’.

At that time, the panel shifts to a fight between Gigantomachia vs Mt. Lady when she says “I won’t let you go”. 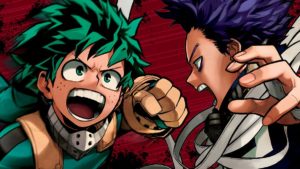