Today, Battlefield 5 is getting a new update, which brings back the Wake Island Map, Community Games, and a lot more. The new Battlefield 5 brings the latest patch across all platforms. The new update is already live and can be downloaded now. Here, below, you can check out the details of the new patch update.

The most interesting part of the latest update is the new map, which made its debut in Battlefield 1943. EA is bringing back the horse-shoe shaped Wake Island map with a few changes. First of all, the new map is bigger than the original version, according to the official trailer, the new map is double the size of the earlier version. 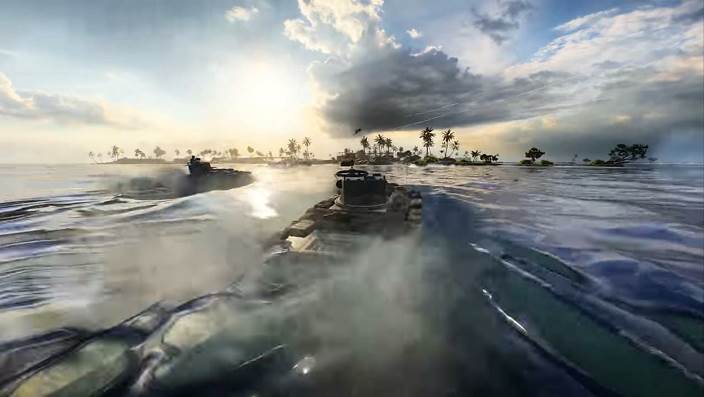 Second, this time developers have included more vegetation and rocks in the map, which can be used as cover from the sniper. This has been done while keeping in mind the shape of the map, where sniping would have been a piece of cake.

And at last, developers have balanced the weapons with the new patch update, for fair match-making in the new Wake Island map.

There are a lot of changes that have been introduced by the developers.  You can check out the complete official patch notes below.

Rather high rate of fire. Reduced damage per shot and fast damage dropoff.

SMGs with extended drop-off. Easy to use at the cost of lower ROF. Generally good handling that does not impact ranged performance.

SMGs with reduced damage drop-off at the cost of lower damage output at close range. Allows Medics to get extra range on open maps.

AR with higher ROF and reduced damage per shot.

Hard hitting burstfire AR. ROF is rather low, as is damage drop-off. Best used at some distance.

LMGs with low to medium ROF. Decent damage per bullet give it similar effective range as the High ROF LMGs.

Medium to fast firing LMGs with good damage in close range. Fast damage dropoff limits effective range. Handling is not an issue for the distances the weapon is designed to be good at.

Highly accurate and controllable LMGs with a very low ROF. Constant damage per bullet has them unable to compete at close range, but very strong at longer ranges.

Very fast firing MMGs with good start damage, but fast drop off. Handling needs to limit range further, as the damage drop off alone is partially offset by the high ROF and large magazine capacities for MMGs.

Medium ROF MMG with good damage per bullet and gentle dropoff. Not the best up close, but good handling and damage dropoff give it better range than other MMGs.

With its fixed, decent damage and medium ROF, it can take care of enemies at any range quickly if landing headshots. Recoil is low, but low magazine capacity and damage per bodyshot make it unattractive if not going for headshots.

Medium ROF and good maximum damage make it very good for closer ranges when combined with its big detachable magazine.

Fast firing SAR with medium damage per bullet. Not good at close or very long range, but the in between.

Has a longer reload but slightly less recoil and faster bullets make it a bit easier to use.

Effective Range: 20 m and beyond

Rather slow firing SARs with good damage per hit and ranged capabilities. Recoil is balanced around magazine capacity and reload, with the M1 Garand coming in very low.

Changing damage is not viable on SLRs. Adjustments made via reduced ROF.

Slow firing semi automatic rifle with a very strong bullet. Damage drops off at long range.. At closer distances, they can keep up with regular SARs, but are less forgiving.

Effective Range: 30 m and beyond

Very slow firing semi automatic rifles with an extremely powerful bullet. They can keep up with or even beat the heavy hitting semi SARs, but are less forgiving to use due to their ROF.

Reduced one hit kill range for all ammo types. Around 2 meters less.

Fast-firing semi automatic shotgun with a rather low effective range.

Triple barrel combination gun. The two buckshot barrels can be fired in quick succession and have the best effective range of all shotguns. The rifle barrel fires a unique bullet that is different from slugs in that it can always kill with a headshot.

War Thunder Xbox Servers down (not working) for many users

War Thunder Xbox Servers down (not working) for many users