Bally Sports App blank screen issue : How to fix it ?

Bally Sports App was launched on 31st March 2021. It replaced Fox Sports GO. Bally Sports App can be accessed on mobile and connected devices like Apple TV, Fire TV and Android TV. The process to roll out the app on Roku device is going on at a fast pace. It can be used for a lot more than just streaming live games. Bally Sports App allows you to track scores, stats, standings, and news. You will also get to see video game previews and highlights from games of teams that play on Bally Sports RSNs.

If you are able to access Bally Sports RSNs with your cable, satellite, or streaming provider, which is limited only to AT&T TV, you can authenticate to access your team’s live games. There are no blackouts and it means that you can watch the games at the comfort of your home or when you are sitting somewhere else. The new video player now has a TV Guide. You can watch past games and shows on-demand. If you create a Bally Sports account, it will allow you to follow your favorite teams so you can track only those you care about for. 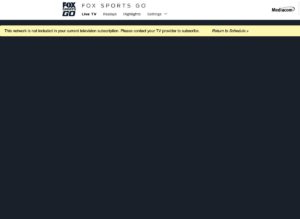 But recently an issue has been reported by the users of the Bally Sports App. Users have complained about a blank screen problem coming up in the app. People said that they are not able to watch their favorite content because of this issue. People said that when they tried to watch any live sports content, all they were able to see was a blank screen on their devices. A few other users have complained that they were able to play the content without any issue, but suddenly after a few minutes, the blank screen again appeared on the screen.

Some other users have also said that they experienced the blank screen issue just in terms of some specific content and it did not happen in terms of other content. Although the developers of the app have not provided an official fix for this problem, there are a few things you can try to fix it –

Bally Sports App video keeps freezing : How to fix it in 2021?

Hearthstone error: “there was an error starting your game”: How to fix this issue in 2021 ?

Hearthstone error: “there was an error starting your game”: How to fix this issue in 2021 ?