ASUS is one of those brands that has maintained its balance between mid0range and high-range devices finely. ASUS started its gaming series with the launch of ASUS ROG. This device series was a huge hit in gaming laptops due to its configurations and appearance. IT was then brought to smartphones which we think, by this time, has reached a lot of people as gaming in mobiles took a revolutionary turn after 2017.

ASUS ROG Phone 2 is a premium, gaming device from the brand that was launched in the month of July 2019. This model currently costs around $481 dollars and is available only in two colors- Matte Black and Glossy Black. 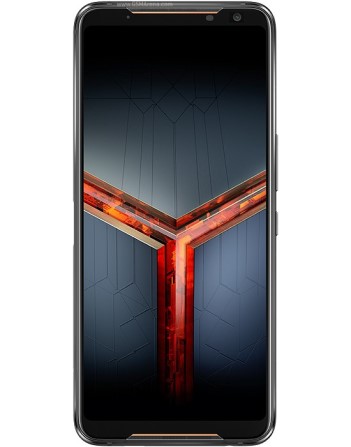 We would like to start with the very device variants that this beast of mobile is available for. ROG Phone 2 is available in four variants- 128GB 8GB RAM, 256GB 12GB RAM, 512GB 12GB RAM and 1TB 12GB RAM (Yes! A massive 1TB ROM). This device is powered by the best and smooth Snapdragon 855+ and boots on Android 9 OS pre-installed. Though it’s a gaming device, the brand has kept the display dimensions the average that we find in most of the devices now- 6.59-inches

ASUS ROG Phone 2 rocks a dual-camera setup at the rear end where 48MP is the primary sensor and 13MP is for ultra-wide capture. The front camera is a 24MP selfie shooter and the quality are reviewed to be excellent and more-than-enough for a gaming device. The device is run by a massive 6000mAh battery for which you can put the entire cash!

ASUS ROG Phone 2 is a modern-day device that supports all the latest features with ease. One of the updates that users waited for very long was the Android 10 update for this device and finally, they’ve now got a reason to celebrate! 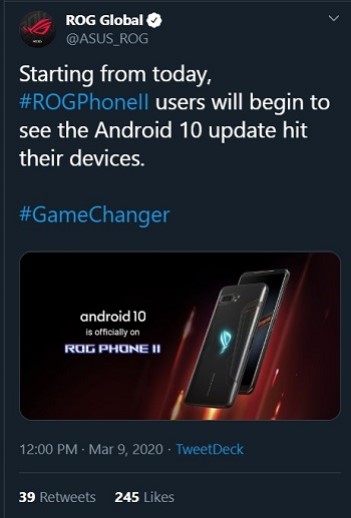 The Android 10 update for ASUS ROG Phone 2 has begun to roll-out. As you can see, the officials took it to twitter to officially announce the news that the update has started to push out for the devices.

After launching the Android 10 update for the ROG Phone 2 earlier this month, the brand pushed out Kernel source code for the device that will implement kernel source on top of Android 10. This update push will support the further modification of the code by other manufacturers to gain benefits and make custom developments. Check the link below to download the Kernel source code.

With the update of the Kernel code, we can expect a lot of custom developments to take place in the interface. Some custom resource changes include custom ROMs, kernels, etc. based on Android 10 for ROG Phone 2.

Rest assured, stay tuned for related articles and updates. Also, share this article with all those who own ASUS ROG Phone 2.