Apple Music refers to a music and video streaming service. It is developed by Apple Inc. Users can select music for streaming to their device on-demand. They can also listen to existing playlists. Apple Music includes Internet radio stations Apple Music 1, Apple Music Hits and Apple Music Country, that broadcasts live to around 200 countries for 24 hours in a day. Apple Music was announced on 8th June 2015 and was officially launched on 30th June 2015. New subscribers also get a six-month free trial period.

The initial iOS version opened to mixed reviews. Criticism was directed towards the user interface deemed as ‘not intuitive’. But it was praised for the playlist curation, the huge library of songs for streaming and the integration with other Apple devices and services. The app got a significant redesign in iOS 10. This one received positive feedback. It was praised for the updated interface with less clutter, improved navigation and more importance on users’ libraries. The service crossed the mark of 10 million subscribers in only six months.

Apple Music has approximately 60 million subscribers all around the world since June 2019. Initially a music service, Apple Music started expanding into video in 2016. Apple is actively investing a lot in the production and purchase of video content. 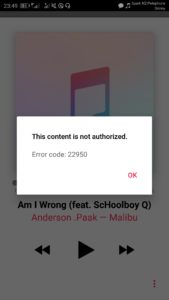 But recently the service has been facing an error that has become a major headache for many users. The error is being called as the Error Code 22950. Users said that they are experiencing this error while playing any track on Apple Music. A user said that he has been facing the error for almost two days. Another user said that every time he tries to play a track, the Error Code 22950 appears on screen. A few users have also complained that they are facing this error only in terms of some specific tracks and it doesn’t pop up while playing other tracks.