Apple Music refers to a subscription-based music streaming service. The service offers access to around 70 million songs. Apple Music has been packed with various features. This includes offline listening in case if you are not connected. This combines all the music in one place, even if the songs are ripped from a CD. The service also provides live radio stations and integration with Siri so that you can control most of the things with voice commands. Apple Music was launched in 2015 after Apple acquired Beats Electronics in 2014. 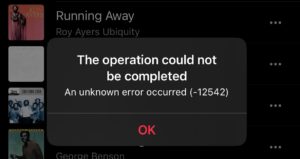 But Apple Music has also been a victim of certain error codes that raises different other issues. One specific error that has been most recently reported by users is the Error Code 12542. Users explained the error as a problem where some of the music is not played. When they try to play a specific song that was skipped by the service, the Error Code 12542 appears on screen. The error normally appears as ‘The operation could not be completed. An unknown error occurred (-12542).

A few other users have also said that sometimes the error pops up in between when they are playing any track. Some have experienced the error while searching for their favorite tracks. Let me tell you that Apple has not yet officially confirmed anything on how to solve this issue and there is no permanent troubleshooting step available right now for this issue. At present, download the music into your iPhone instead of streaming it from the iMusic app. Also, you restart your phone and switch the networks. This should help you to fix the problem.