The 1.8.2 update for the Apollo Reddit app for iOS got released yesterday. The new update builds on version 1.8 and 1.8.1. It brings a bunch of new improvements and bug fixes to the table.

Since it’s release yesterday, a striking number of people have reported an issue after updating their Apollo Reddit app. This issue is concerned with the app crashing randomly and unexpectedly. The number of reports have increased significantly over the past few hours after people switched to 1.8.2. 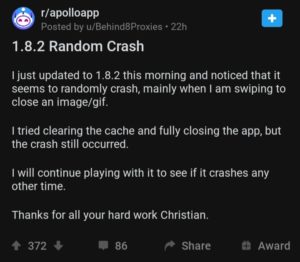 According to several crash reports, people have noticed that it happens more often while closing media files. In other words, the app crashes when one swipes to close an image of a gif.

Many reports also claim that the all crashes on tapping on any image. This issue also occured when recieving a phone call while the Apollo Reddit app was running. Though these are just everybody’s subjective observations, there is no set thing that triggers the app to crash. Click here to see an example of the Apollo app crashing.

On a Reddit thread, we found a comment claiming that clearing the all cache seems to fix this issue. Only to see it countered by other threads stating that this method didn’t work on their iOS device.

The Apollo Reddit app seemed to be working fine before the update 1.8.2 got released. The new update is available on the app store but we wouldn’t recommend updating just yet. With the increasing amount of crash complaints coming from users, many people have become disappointed.

As of now there seems to be no official source confirming a fix but it will most likely come soon. The update has made the app unusable in its current state, there by we suggest sticking to the previous version for the meantime.

Check out the Apollo Reddit app sub-reddit for more detail and examples of this issue.