Its been the data mining age in the e-sports community. A large part of the community now fish an update’s core code to find information about upcoming features to a game. And now we have data miners of Apex Legends leaking a new feature called clubs with the much anticipated cross-platform play.

When you look at other multiplayer games, most of them feature a guild or clan system in them. These clan systems allow similar to bond and do quests & challenges together. The addition of a new social element would be cool especially after the cross-platform update.

So we have a very reliable data miner Shrugtal who has revealed the info on how clubs will function with multiple tiers. The tiers for members vary from grunts to creators. And every tier will have a different function, like admins and mods will be able to ban or kick people.

Further, the categorization of the clubs/clans can be done on the basis of ranking & goals. So low-rank players cannot join a required high-rank club without creator approval. This will allow people to find compatible members much easier as goals start aligning.

The whole process of clans builds an in-game method that allows people to find other players rather than use discord servers or social media to get reliable teammates. The best part of this feature is the ease of finding teammates at least theoretically speaking. 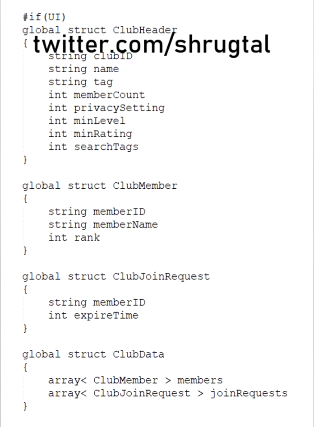 It also makes sense to release it before the cross-platform system emerges connecting player bases differentiated by consoles. This will also allow for a better seed system in the game to be implemented.

However, we want you to note that this is not official news from Respawn. So this feature might just come at a later date or can even be scrubbed. Let us know your thoughts on this new feature.

Pokemon Go: Delay between throws issue/bug got fixed in the latest update

Pokemon Go: Delay between throws issue/bug got fixed in the latest update