Now you can shout ‘multicorfors’ and change your outfit at the flick of a wand in Harry Potter-esque style! The brand new feature in New Horizons allows you to change your costume on the fly. Here are all the 21 different variants and a full wand guide on them.

Clothing ingenuity is stressed a lot in animal crossing. All the custom made dresses or the Able Sister’s design makes it impossible to choose just one dress. Will I be Ash Ketchum or Goku or maybe my favourite Dio from Jojo’s Bizzare Adventure. The choices are multiple and the wand allows you to be whoever you want, whenever you desire.

How to find and craft a magic wand guide

Firstly, you have to seek out Celeste or Wake, she is Blather’s sister. She has a passion for all things celestial- astronomy, astrology or anything! You can randomly seek her during starry sky nights with shooting stars. Though sometimes she appears on regular nights as well. She informs you about meteor showers and gives you a DIY recipe of the wand or space or zodiac related recipe. However, the chance is random so you will have to bet on your luck. Till then you can start collecting the most important part of the game, star fragments.

When the event of shooting stars falls on our island, we must stand facing the sky and, without any equipped object in our hands, press button A as soon as we see that one of these stars is crossing the sky. We will see how our character reacts by putting his hands together and closing his eyes, which amounts to making a wish. We can do it on more than one occasion and for every wish, we will receive the next day a fragment of a star on the coast of our beaches. 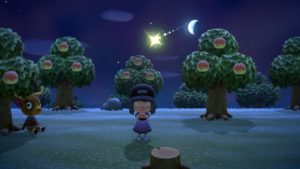 Each wand and how to find and make them can be found below:

Get as many star fragments as you can coz it will take a lot of them. If you are having trouble finding recipes then try trading with friends or go to a friend’s island when Celeste is visiting so you can get another chance to get a recipe.