Your paradise island and your friend’s island aren’t the only ones that you can visit. We made a post a few days back that told you about the Bamboo Island you can land to. Basically you have to buy the Nook Miles ticket and you can go to any other mystery island. What? You thought yours is the only island? Well, No! But as soon as you rack up 2000 Nook Miles, take your Nook Miles ticket to the airport and take the trip. To purchase the ticket you will have to first go to the NookStop at Residential Services Centre. So you can go to one of those 20 really cool islands with their own ecology that you can exploit as any self-serving human would do.

Then, explore the Mystery Island, fill your pockets with valuable resources, and return home. Just make sure you have everything before you go back. Once you leave a Mystery Island, you cannot go back! 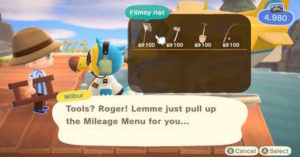 Another prospect of going to a random island is recruiting new villagers on these adventures. Using Amiibo, you slowly increase the strength of your island’s numbers. If you don’t have a stack of Amiibo, you can also find them on the Mystery Island you are visiting. See the perks of travelling? So if you talk to someone enough on those islands, you will most likely see them camped in your island as a new villager!

20 unique islands waiting to be explored. Once you leave an island, you can never return. The shape and layout are almost identical to any island, it’s the content inside that is different. There are certain tools that you need at your disposal at all times. We have grouped these 20 islands in 3 categories based on their chances of appearance and importance to make it easier for the players.

Only 4 islands show up on the first run of the mystery islands. None of the other islands shows up for the first tour. Fans have given them the names because there aren’t too many distinguishing characters to these 4 islands.

After the first tour, the option expands and you can freely explore these islands. 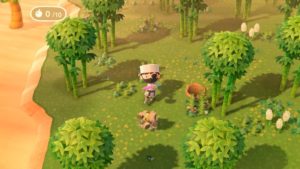 We covered what the bamboo island beholds a few days back. The island is full of bamboo trees and it is a valuable resource, so if you by chance end up on the bamboo island, dig a tree up and take them back to your island and plant them to make them accessible.

The island is much like the normal island with just one exception, you can find multiple different types of flowers, mostly hybrids. There is also another feature to this island, it offers you unique butterflies. The blue Emperor butterfly is worth 4000 bells so be sure to catch it if you see it.

This island contains fruits that you would not normally possess. You should dig up those trees and take them back to your island to take full advantage of your trip.

Farming Bells and you would have heard of Tarantulas. They have become quite infamous for this as long as you go at night, you can find a few tarantulas and each of them cost 8000 bells each. You can sell them at Nook Cranny Shop.

Nothing except trash here and a few water-related bugs that you can catch.

With an Elevated area and a waterfall that curls then feeds into the ocean. Only water-bugs found here.

The only fish that show up here are size four or larger. It has a single raised area which has a pair of waterfalls. The waterfalls form a river that circles a smaller island, before leading back out to the sea. Only once per day.

The layout is like Bamboo Island, but instead of bamboo, it only has hardwood trees. the only bugs that spawn here are those associated with hardwood trees, such as stags, beetles, and walking sticks. Only once per day.

Huge river blocked in the middle by a rock. Breaking that rock in a single blow gets you 8000 bells. There are more bell rocks inland. You can harvest about 88,500 bells from this island.

No rivers, no ponds. 4 small cliffs on each corner of the island. The ground is covered in bell rocks and flowers. Only once per day.

I don’t know if you understand the pattern yet or not but a shark island has sharks. Hammerhead sharks are for 8000 bells, Whale Shark for 13000 bells and the Great White Shark is 15000 bells. But now in April, they have added Ocean, Sunfish and other fishes. Only can show up between June and September.

Like Big Fish Island #2, only fish size four or larger will spawn here. It also has hybrid flowers and the bugs that those flowers attract. Only once per day.

It has no rivers or ponds, but three cliff areas. The only trees that grow here are hardwood trees, and the only bugs that spawn here are those associated with hardwood trees, such as stags, beetles, and walking sticks.

This island has a smaller island at the center, surrounded by a river too wide to vault save for a single spot. The center island has a single rock that will produce up to nine gold nuggets when struck. The only bugs that spawn here are tarantulas or scorpions, depending on the time of year.