Animal Crossing New Horizons : How To Get To Tarantula Island & catch Tarantula

Animal Crossing New Horizons is finally available on the Nintendo Switch platform. The game comes under the Social simulation genre. In the game, players take the role of a customizable character who moves to a deserted island after purchasing a vacation package from Tom Nook.

Tarantula Island can be discovered by going on a Mystery Tour from Airport. However, landing into Tarantula Island is completely random which means you need to keep trying until you get access to it.

But in order to go to Mystery Tour, players need to buy a Nook Miles ticket which costs 2000 miles and can be purchased from Nook Stop Shop.

Speaking of Tarantula Island, it seems to have a large central area where tons of Tarantula roam around. The area is surrounded by a river, & on it’s another side, there is a beach. 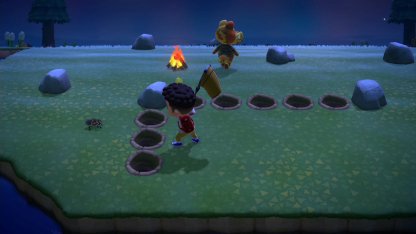 You can also dig a perimeter of holes around yourself, it will block the Tarantula from approaching you but still let you catch them with your net! You are required to be cautious while catching Tarantula as if you will approach too aggressively, you will get bitten. Tarantula jumps while attacking (in the threatening pose). You can’t outrun this attack, if it is coming under threatening pose. You can also have a look at the Japanese video for some more reference.